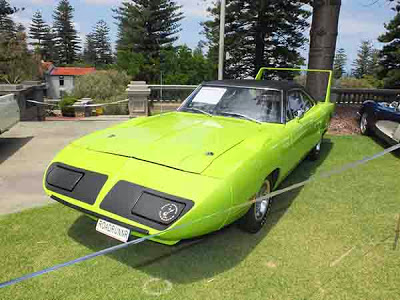 Did goe to the ” Celebration of The Motorcar ” at Cottesloe Civic Centre yesterday and was greatley amused.

The first point of note was the method of entry – the cash desk was unprepared for the hordes who assaulted them. $ 20 to get in – money to charity – but so many bank machines issue $ 50 notes that you need a big float to cope with ticket sales. It is a point that catches many small traders at markets, too. You only need one $ 100 note man at the start to screw up sales for the rest of the morning.

Once in, I assembled my professional-quality internationally-famous state-of-the-art image capture system ( Also known as my Fuji X-10 and a Nikon SB 700 on an old Metz bracket.) out of it’s high-tech carrying system ( An old Tamrac bag and a spare woollen sock.) and started to take pictures of the cars. Then it started.

It always starts. Whenever I am out with other photographers I start to notice what they are carrying – and what they are doing with it. I try not to look – but the instinct of the sales trade is too strong. I MUST look…

I can look with some degree of pity – I have been where many of them are now, and I can recognise the symptoms. I know what impels some of them – like the man with the Black Rapid double harness and the two battery gripped DSLR cameras depending from the straps. I saw that in the shop and I saw myself as the sportswar correspondent running through the shell craters with two rigs…Fortunately I snapped out of it here in the shop before I did myself an injury. I hope the gentleman is similarly lucky – I admire his fortitude in the sunshine. And I was amazed when he pulled yet a third grip-equipped DSLR from some other portion of his person for the fisheye lens. I stopped myself from following him in case he had an 800mm telephoto and all my concepts of space and time would have been voided.

The other end of the equipment spectrum was much in evidence – the mobile phone camera. Held at arm’s length and waved in the sunshine. I have been assured by mobile phone salesman that this produces a file fully as detailed as that from a full-frame DSLR with full studio lighting plus you can order pizza on it. This is patent nonsense – I tried calling Domino’s on a Canon 5D Mk III and got nowhere. The man with the iPad was wrong – just wrong.

Somewhere in between were the small DSLR users  – I saw plenty of APSC Canon and Nikon cameras and the users were doing pretty well in their framing and angles. But not a one of them popped up their integral flash for a bit of fill. In some cases it would have made all the difference to a shot into dark wheel wells and the shaded side of a car. But they will get better and good on them.

One enthusiast was using a Leica M digital camera – with what looked like a 28 mm lens. He had on the correct lens hood and was focussing, squaring, and settling himself for his shots. I think he will have some good results from that Leica lens.

Later in the day I believe that Thorsten Overgaard and Saul took a number of their Leica enthusiasts to the show with a lot of the new equipment. With Mr. T’s instructions they should have gotten some very good shots – particularly as the light would have been settling in from the west. Of course I still say “fill” but that is just me.

One final note for car show photographers. Car shows are crowded affairs and you sometimes want to get an undisturbed view of a car but are continually being baulked of your desire by people wandering into the frame. There are two methods of dealing with this – a pea shooter and a pocket full of small pebbles to blast them away from your front – or the Jedi Mind Trick.

For the latter, you just position yourself where you need to be for the car and stare at it. As the oicks wander in you direct vibrational mind messages to them that this is not the car they are looking for. Eventually they move away – be pre-focussed and ready for a snap shot when it is clear. May the Force be with you. 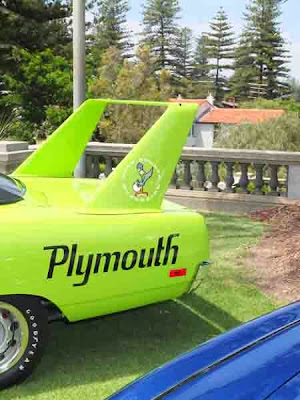