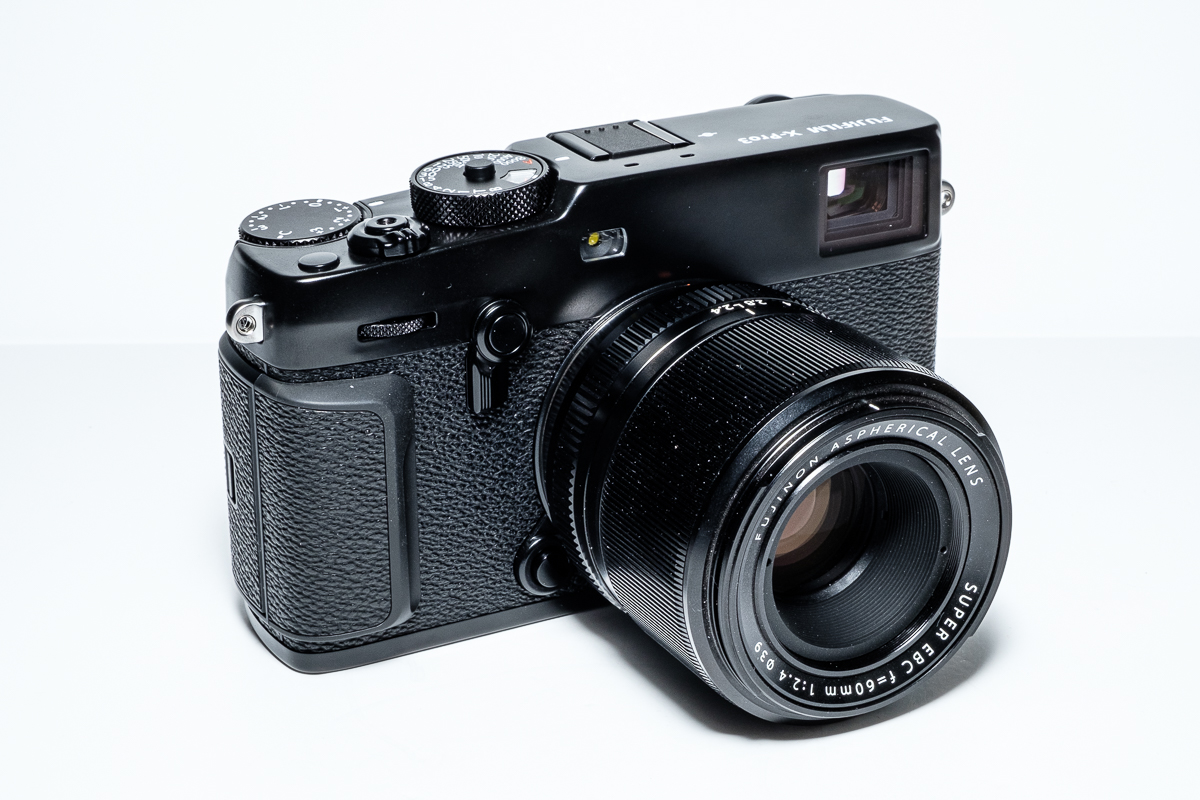 ” Peer ” as in look closely and turn the thing every which way under the light. You only do ” pier ” review with the Fujifilm XP series of cameras and even then it’s best to fling them off into clear water so that you can go find them again easily…

The close handling of the shop’s black Fujifilm X-Pro3 camera showed up some interesting things. – some expected and some not.

The main feature of interest was, of course, the unique LCD screen arrangements. We’ve all seen tilting and flipping LCD screen mechanisms before on Fujifilm and other brand cameras – they’ve been a feature of photography for years. Some swing sideways, some rotate up, some do both movements. But none, I think, so far has done what Fujifilm decided upon – hinge the screen on the bottom edge and let it open downwards only. This means that in normal use the thing is shut up flat on the back of the camera.

The rationale behind this from Fujifilm seems to be to make the camera feel more like a traditional film camera and to more or less compel the user to treat it as such in everyday shooting. They do not expect the user to peer ( again that word…) at every shot as soon as it is taken, but to carry on using the viewfinder as the primary aiming and composing aid. Just as we did with the old 35mm film rangefinder cameras.

This is not set in concrete…or titanium. You can indeed flip down the screen, access the menu, make changes, see the results, and do whatever you might have been able to do with a camera like the X-T3 or X-T30. You have a joystick to twiddle and touch screen access. But you cannot settle the screen flat against the back of the camera with the viewing side out – it always hangs down below the level of the camera bottom when open.

To use up space on the external plate at the back, the designers have put in a small subsidiary LCD screen of limited resolution – it doesn’t show the lens image but it can be set to show the main settings that the camera is using at the time or a representation of a film carton end – in colour – as a nostalgic touch. I admire the art and science of this while wondering at the actual utility…

Still, the inclusion of the drop screen means that we effectively have a waist-level viewer for the camera. This is great for casual unobserved shots as well as tabletop and close-up work. And the thing does shut up good and tight when not needed -no flopping open into your eye as you try to take candid shots. And it has a decent armouring panel where the connector tape passes into the camera body. You won’t fracture it. 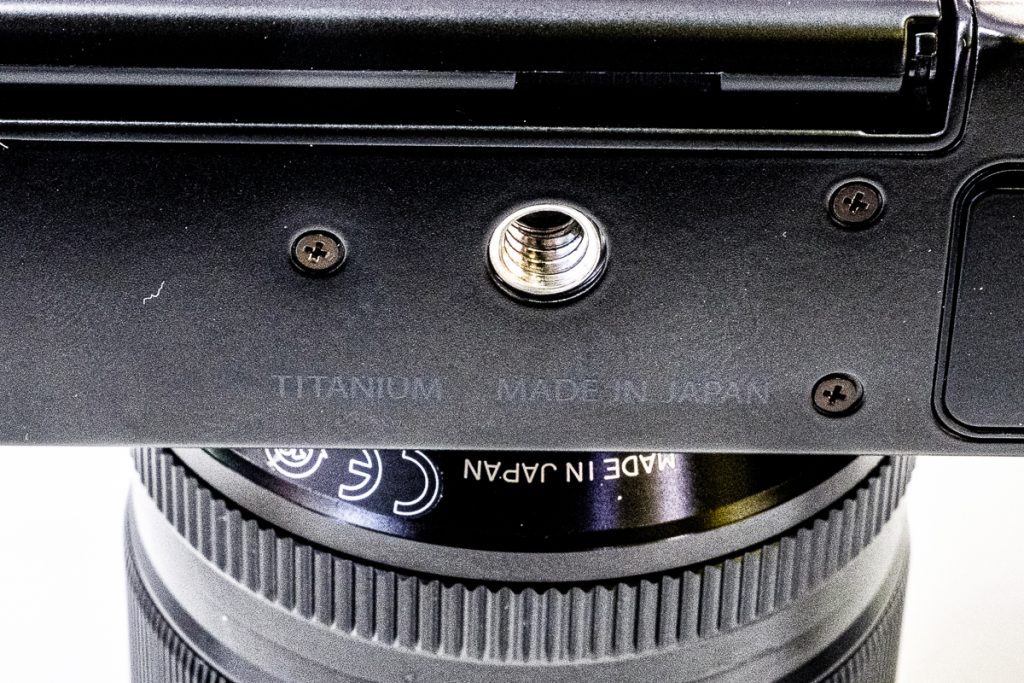 Now come down to the bottom plate of the camera. Both of those inscriptions are important; ” Made In Japan ” and ” Titanium “. One a guarantee of quality and the other of robustness. You won’t be able to dent this plate easily if you are a camera flinger. If you opt for one of the extra-price dura coatings you won’t even be able to scratch it. It begs the question of what Fujifilm designers imagine that their customers to be really like and what they expect them to do with cameras… 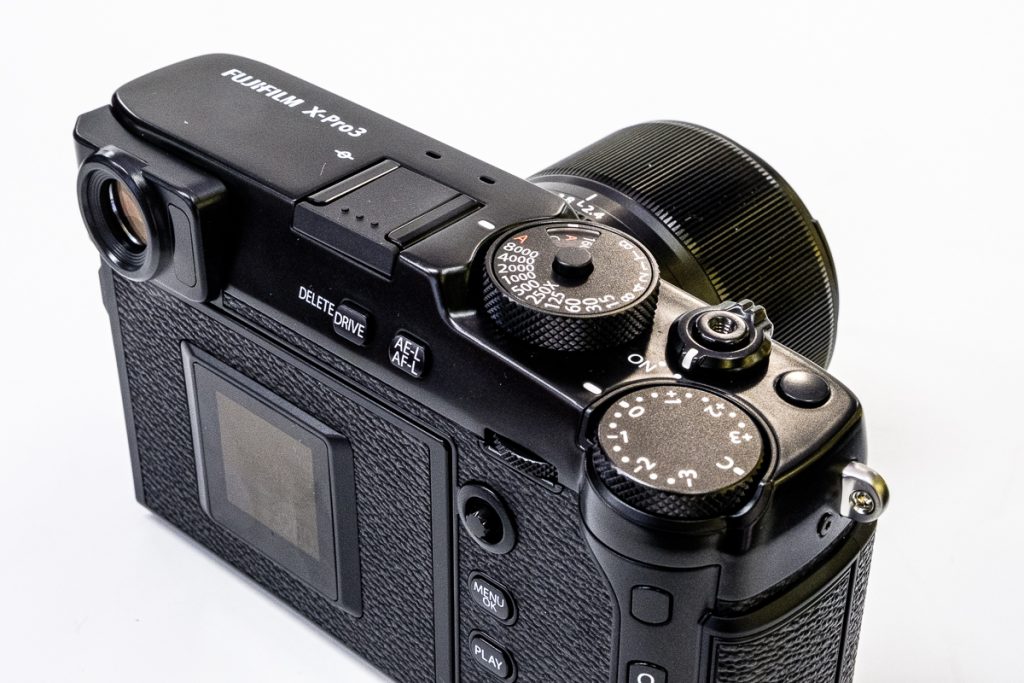 Look on the top plate, however, to see an unusual thing. Look right between the shutter button and the speed dial. See those wavy lines in the plate? Well they are in the black Duratect body in the showcase as well as this black paint one. You don’t se that sort of thing in plastic bodies or in bodies that are cast or milled out of solid blocks. I’m guessing that the top plate is pressed in some way and these marks are where the metal stretches and sets. It must be under tremendous pressure to move like that. It’s not significant to the operation of the camera but don’t be surprised at it.

I’m now hanging out to see a Silver Duratect body come in to find out if it is there as well.