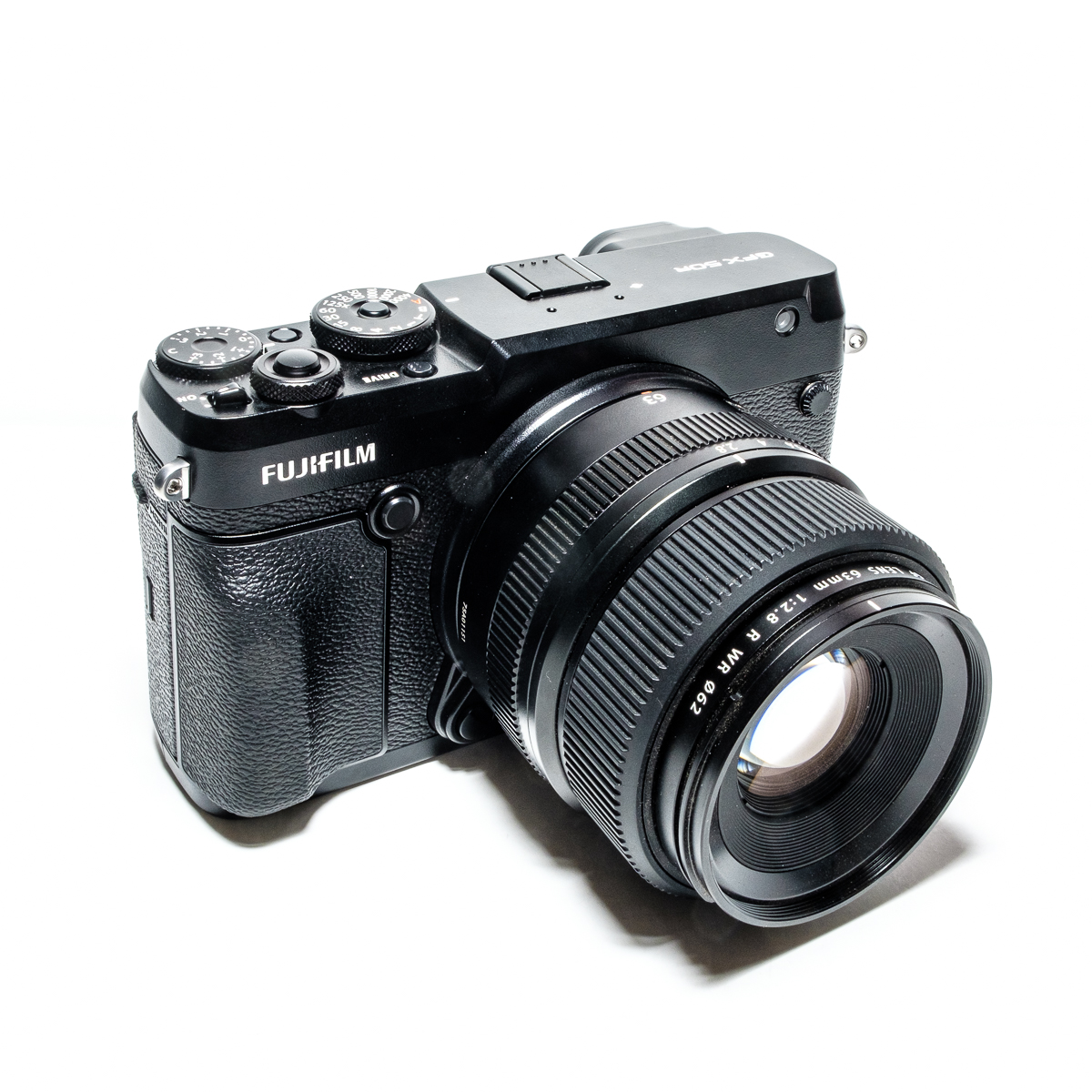 If you take enough time to prepare yourself, you can point and shoot with nearly anything…

Sometimes your subjects welcome this, and sometimes not.

The idea of using a medium format camera as a point and shoot is a little novel. But then again, the Fujifilm GFX 50R is a pretty special camera. I can think of only one other device of this sort in production at present – note that I cannot afford either of them so this review is being conducted upon mere speculation. But I have to remember that my finances may not be yours – you may well be able to take this camera and a bag full of lenses home. Camera Electronic staff will assist you to carry them to the car as soon as she credit card statement comes out of the machine. And they’ll do it smiling. 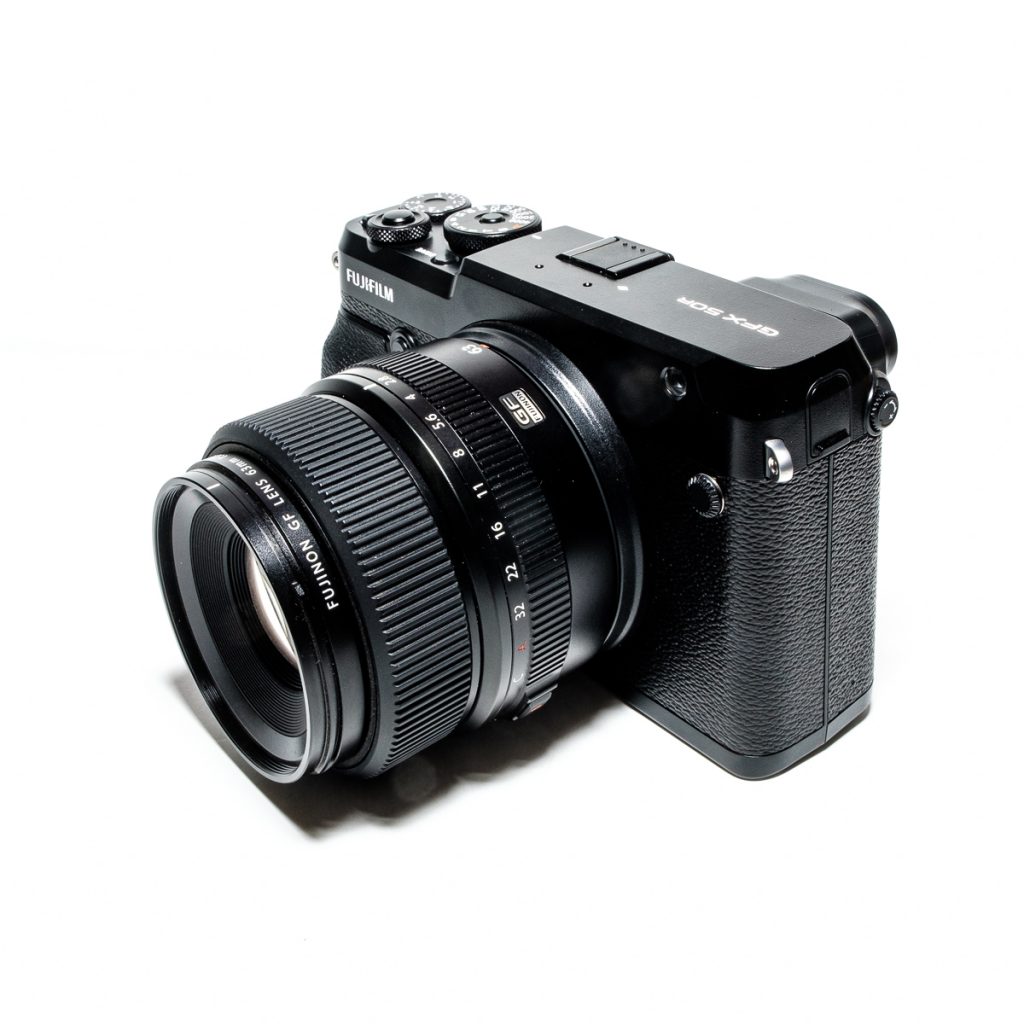 What do you get with the GFX 50R – in this case with a standard sort of lens attached to the front? You get a rangefinder-shape* mirrorless camera with a medium format sensor. You get an eye-level EVF finder, a flipping LCD screen, and traditional shutter speed and aperture ring dials. You get a focusing ring on the prime lens. You get thumbwheel control of compensation and other things that you can specify. You get a Joy! stick and can make as much joy with it as you like. You get the option for auto focus, auto shutter, and auto aperture…all accessible from to outside by wheels or levers.

You don’t get a dedicated ISO dial…a thing that I’ve become used to on my X-T2. I should mourn this a little, as I find myself resorting to it often in the studio – but you can also ask the camera to deal you out an auto ISO from the menu for point and shoot situations. Note that Fujifilm cameras do this particular choice very well if you set sensible parameters in regard to low speed or high ISO. 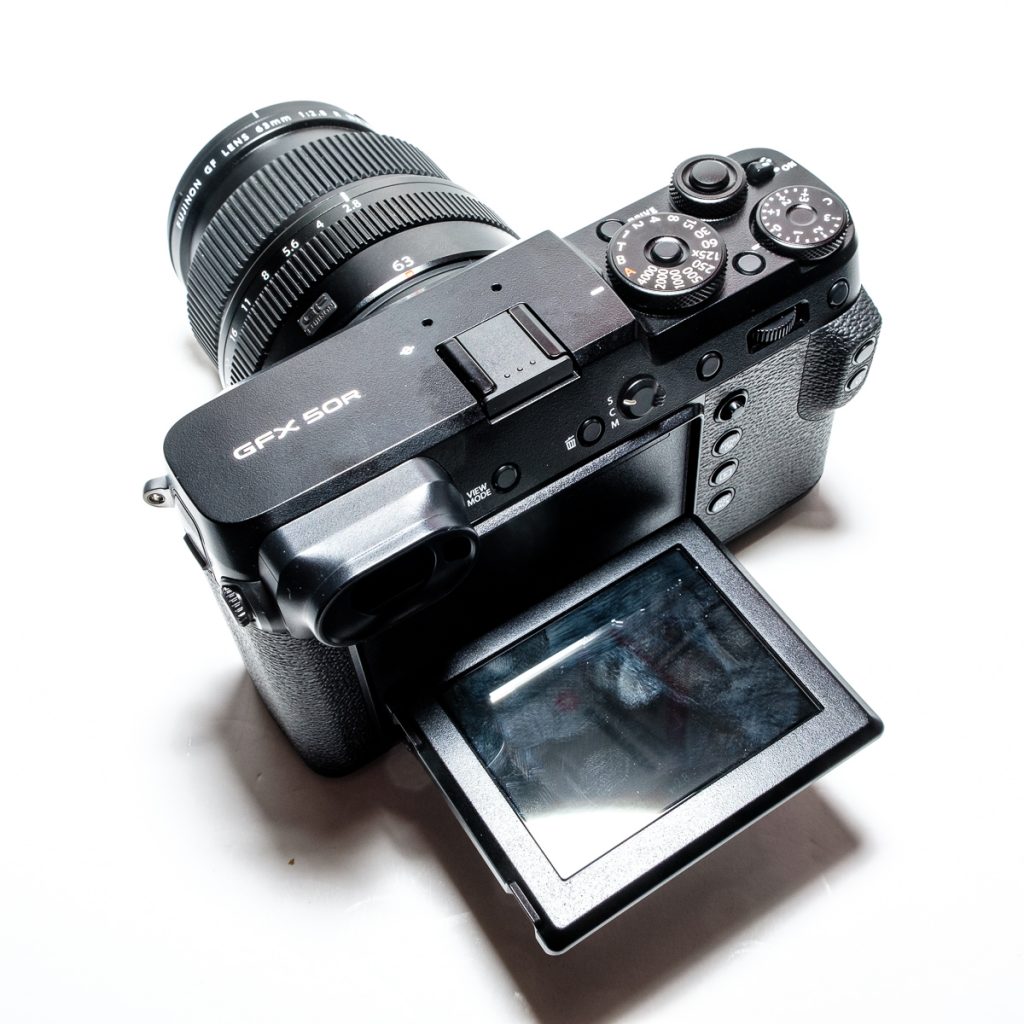 The camera is surprisingly light – you expect weight with medium format and can get it with the other GFX offerings but the Fujifilm designers have recognised that the target market for this camera wants portability. This is a camera that will go overseas on trips and will be hiked and hauled a long way. Better to carry less weight. 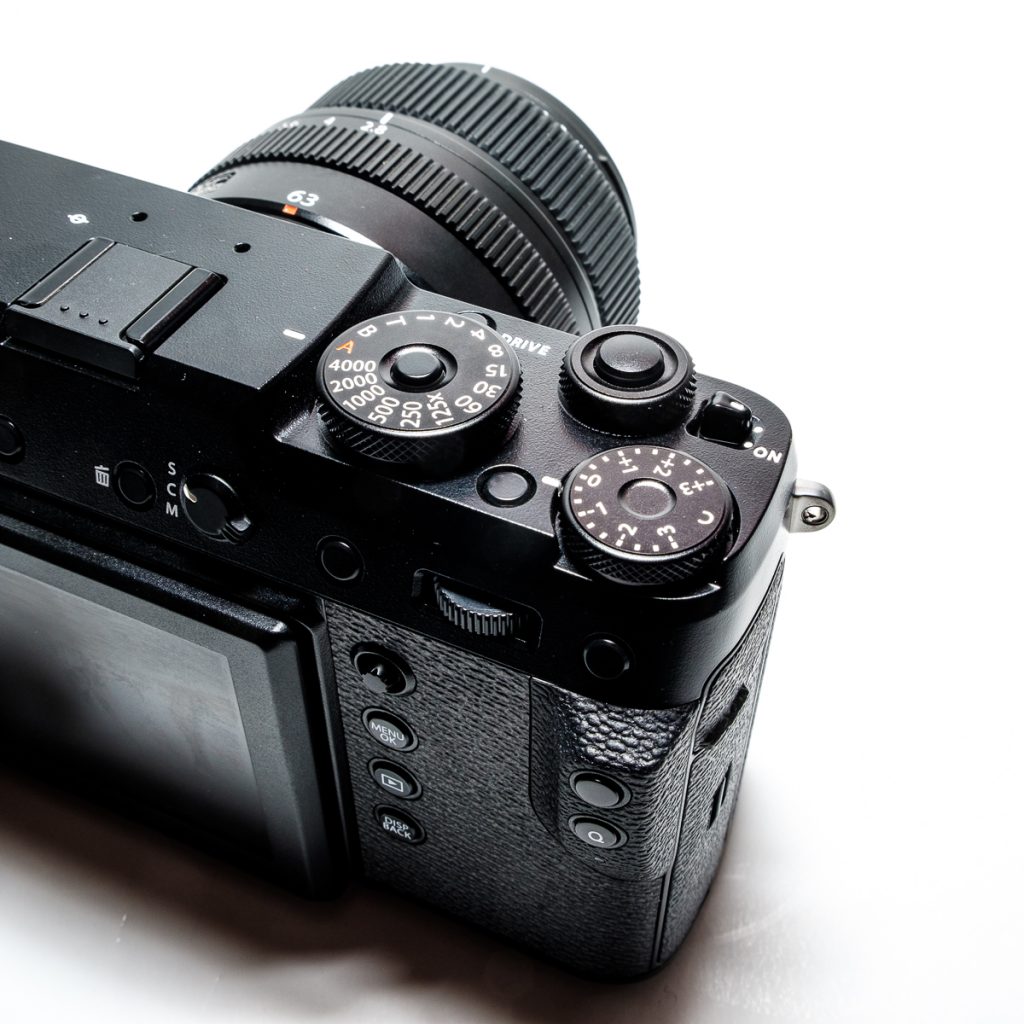 I slipped in a spare card, formatted it, and hiked to the front of the Murray Street Shop. The ISO was set to auto and I figured that I could hold steady down to 1/60 of a second. ( I can hold far better but with heavier devices and a shoulder stock…) I just turned and shot and then turned away…to chimp it, I admit. 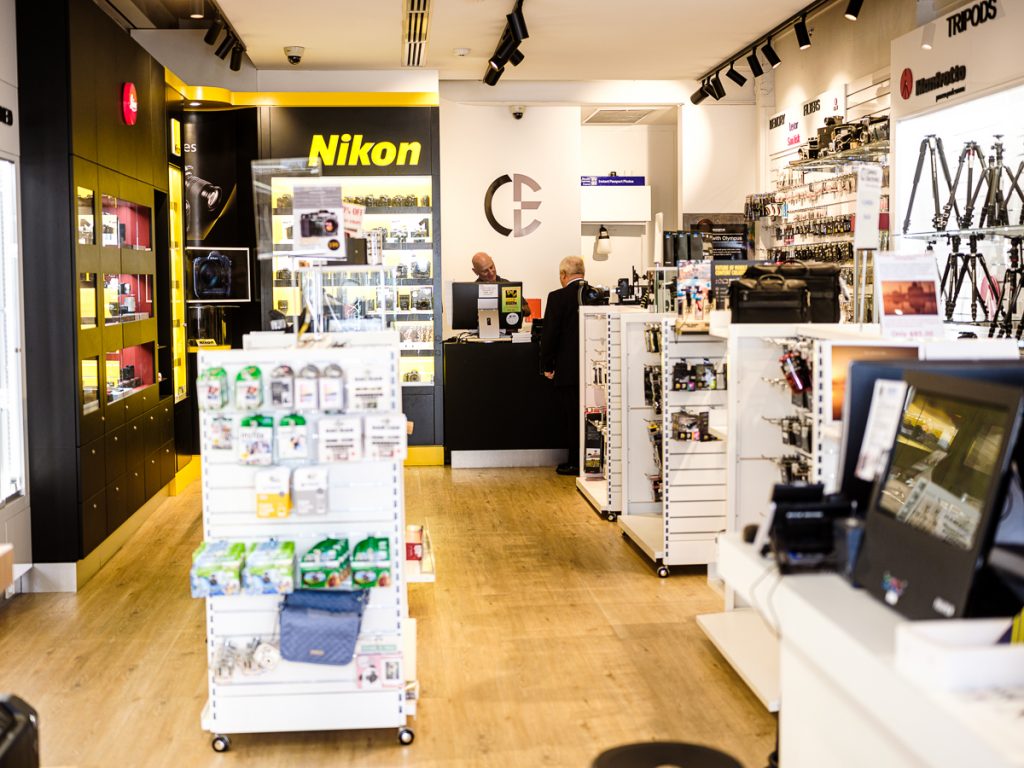 I noted that the camera had nailed the focus at the point I specified – the two gentlemen at the back of the premises  -but had settled upon a wider aperture than I wanted – the front stand was out of focus.  I then commanded a smaller aperture with the ring and tried again. 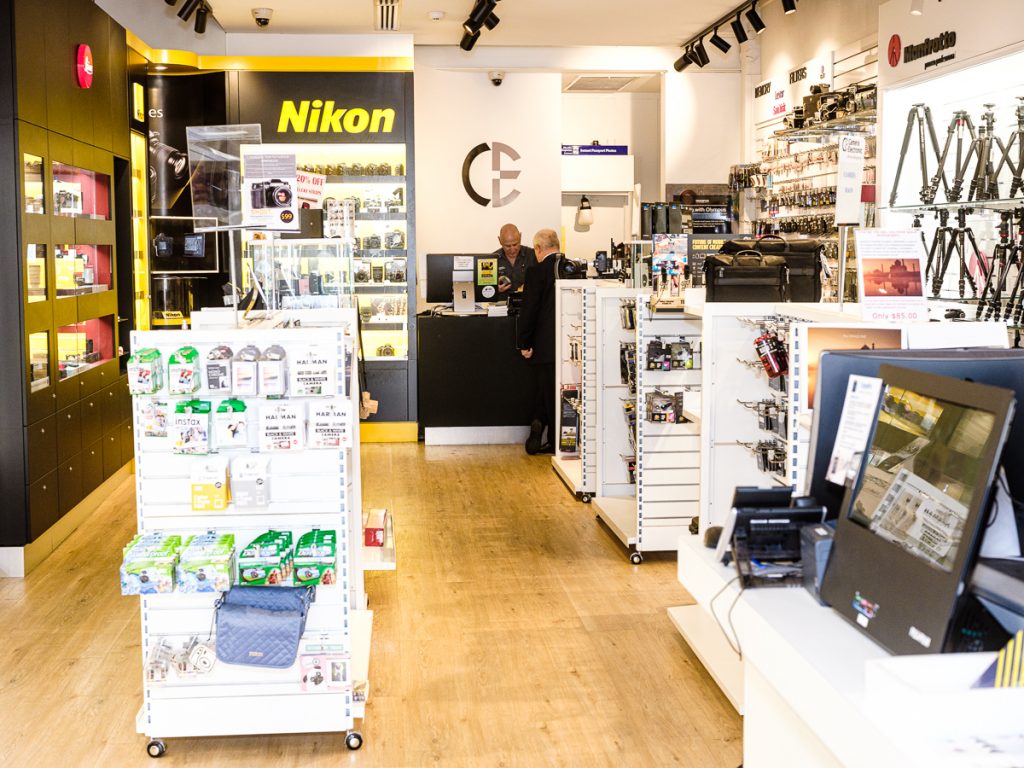 Perfect. These jpegs are tiny little things but I can assure you the RAW files were not. If you were to use this camera for extensive travel shooting and stored all the images as RAW and jpeg you would be chewing through a lot of cards and a lot of memory space back home. You’d be wise to have a powerful computer for the editing, as well. In some respects, is is just as well that Fujifilm jpegs have such good colours – you might almost wing it…

One advantage I see with this camera is the fact that the files are so editable – so croppable – so precise. You can pick a prime focal length lens to suit what you normally intend to photograph with the confidence that you can crop it down to a longer tele without difficulty. There are a lot of images in your image.

The other advantage is that it looks like a point and shoot – particularly if you put their smallest lens on it. You are less threatening or interesting as you shoot with it. In my case I am neither anyway, so if i were using this camera I could become pretty well invisible. Heck, the family sees through me anyway.

*  As opposed to a reflex camera shape. In both cases it’s just shape, as they are mirrorless mechanisms anyway.