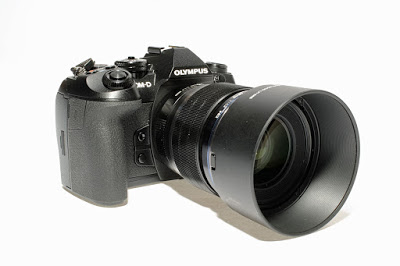 One of the splendid perks of being a weblog writer is that you get the chance to try out new photographic equipment in your own time. It is altogether a different experience from that of reading Internet advertising or just hefting the gear in the retail shop. As a writer, however, you have to have something to say when you start typing – and the only way you can say it with authority is if you are going to do something with the gear that you know how to do.

This last weekend I got to test-drive the new Olympus OM-D E-M1 MkII camera with a variety of lenses – and the Olympus company were kind enough to match the optics to the tasks I normally do. It gave me a chance to exercise the camera in the studio and out covering a long distance subject. Every equipment test is, inevitably, a comparison with other systems  – so it is as well to subject the test gear to the same experiences as the normal rig.

As the Olympus representative pointed out, however, and as I have certainly discovered, there can be a world of difference in the ways the manufacturers ask you what you want to do ( menu communication ) and accept your instructions ( control operation ). We have to second guess how the engineers wish to refer to a function. If we’re lucky we know what we want to do, but the question of how may arise. 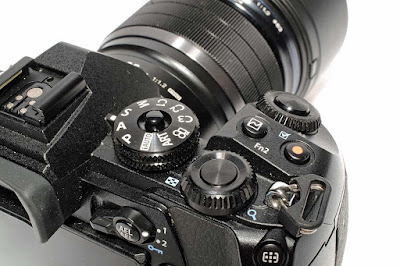 The OM-D E-M1 MkII is new on the scene and there are good stocks available – it is a camera – not a phantom. You can march in, pay up, and march out with one. While you are at it march out with a pro lens.

When you do, you’ll note that the original premise of the mirror-less cameras – small, light, simplified – has been somewhat set aside. This thing is solid and weighty. So are the optics, particularly  the pro-glass models of the Zuiko lenses. The ergonomics are good as the hand grip is deep enough to provide good finger clearance and the placement of the finger and thumb wheel as well as the shutter release are perfect. The on/off switch is somewhat disconcerting until you remember that Olympus used to put the thing on the left top plate under the rewind crank. No crank these days, but the switch is over there. 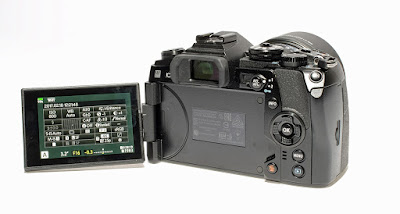 As with many Olympus offerings, there are multiple function buttons scattered over the control panels, and there are multiple ways to actuate the controls. Bless them, they have included two of these buttons right where we most espect them – under the fingers at the right-hand side of the lens mount. You can progam one of them as a depth of field preview like we did in the old film days.

I switched off the touch-screen apparatus as I find it disconcerting – others love this facility. In my case I accessed the most-needed controls by pressing the menu and getting what is essentially an extended ” Q ” display on the LCD screen. Had I not had some coaching from Burke, the Olympus representative, I don’t think I would have found half of the controls.

This week’s experiments were conducted entirely in the JPEG mode – my processing programs will not decode RAW files on something as new as this camera. No matter –  the programs I wanted to try all responded in this mode and with a bit of enlargement I was able to do clear comparisons on the computer. But one thing I would like to mention at the start is the facility that Olympus put in this camera ( and in their Pen F ) for in-camera processing of images. This will give the sort of results that you might produce in an editing program on your main computer. Were you out on the road without access to a computer, you could still edit quite a lot with the camera as you shoot.

Note that the camera came from Burke with a 70% charge and shot all afternoon in the studio – with a number of electricity – hungry programs and screens in use all the time – and still had 22% left at quitting time. I found out why when I brought it home and opened it up the do the charging. 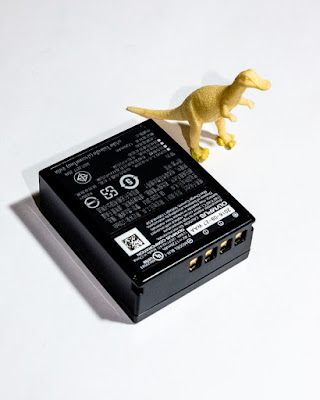 The battery is huge! I’ve seen smaller trays of lasagna…There should be enough capacity there for any reasonable shoot. As a way of measuring the size, that’s a plastic dinosaur – and the battery is bigger. It holds 1720 mAh.

So tomorrow we start in the studio…