Sony Under The Radar 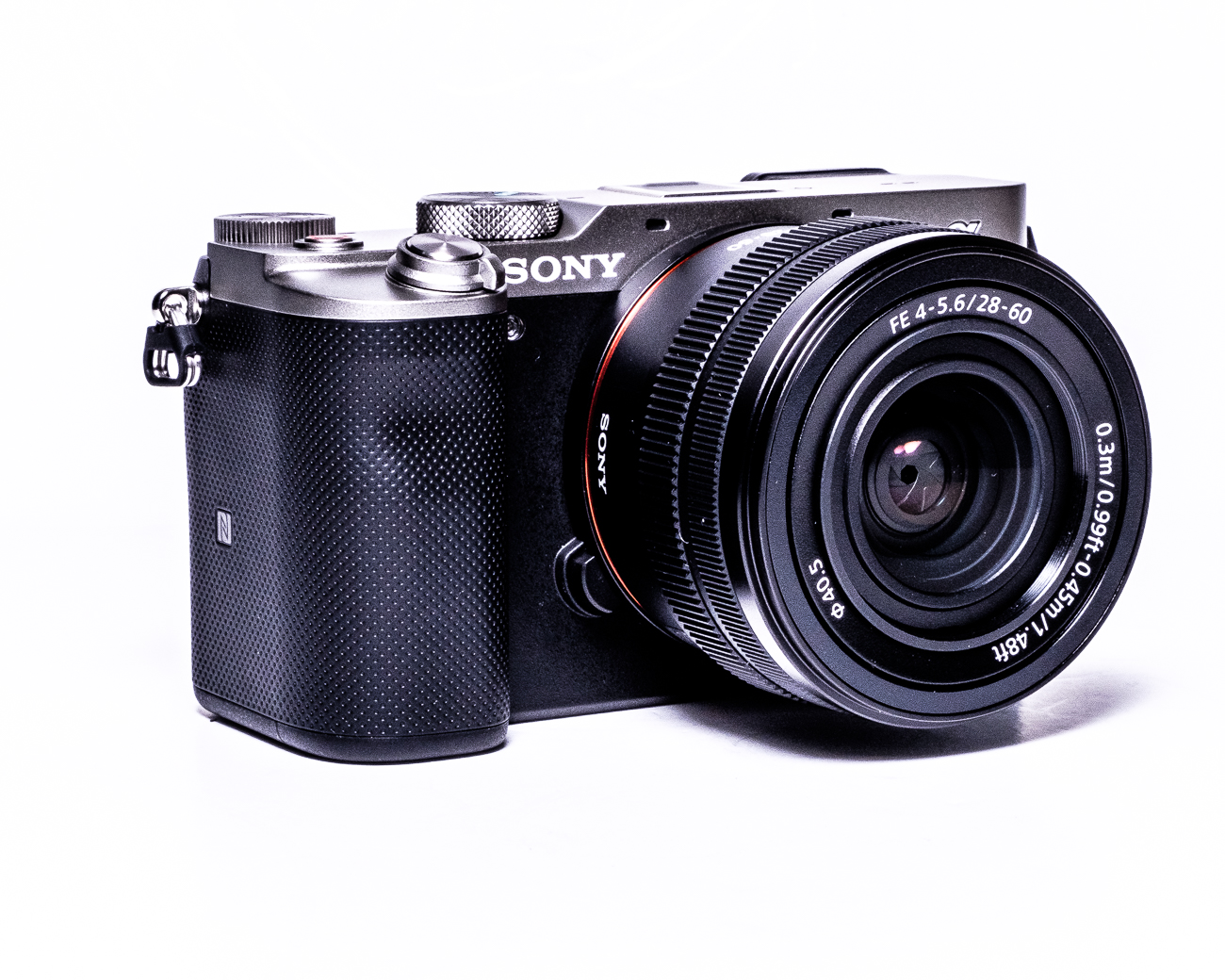 13 Nov Sony Under The Radar

A little while back a new Sony mirrorless full-frame camera came to the shop – an evening’s entertainment was laid on to introduce it to an avid crowd…and the Weather Bureau decided to do the dirty on us. Cold and wet and the punters stayed home – and missed out seeing what might have been a very good show.

At least the star of the evening is now on the Camera Electronic shelves – the Sony Alpha 7C camera. Sheryl Mauger drew it out of the Sony cabinet to show me at my last visit to the shop. 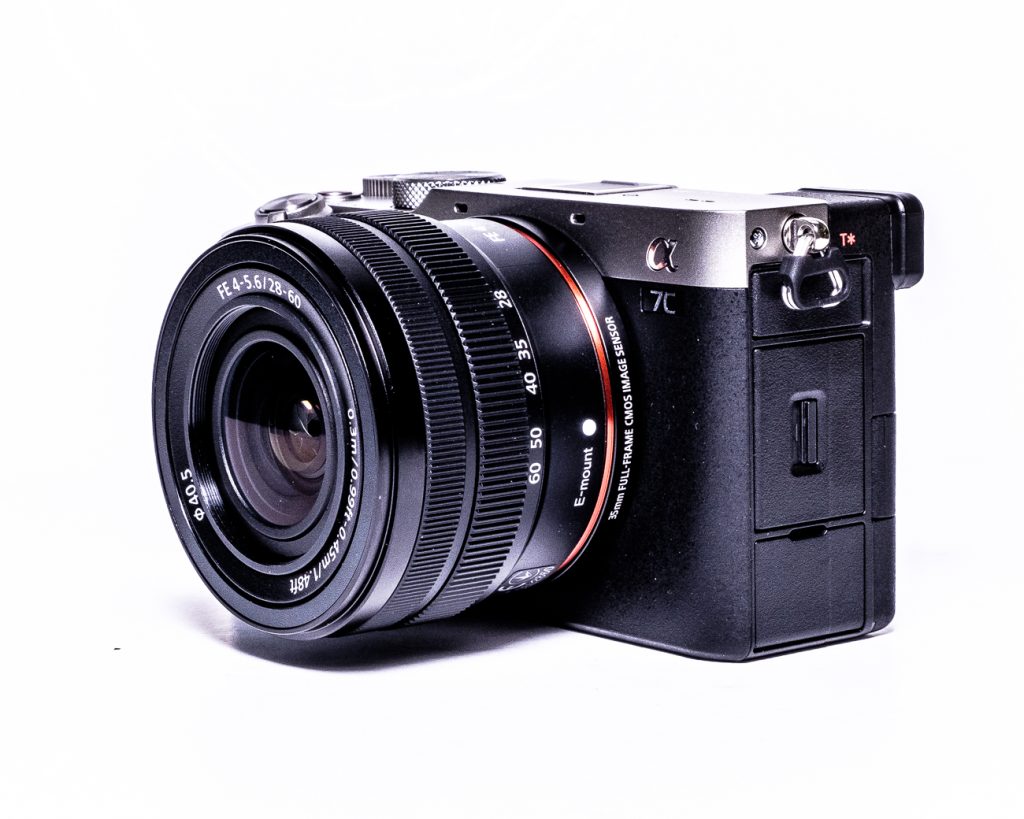 Coming in several finishes, this one is the most handsome seen yet – the grey/silver finish fits in with amateur and professional use… if those terms are even valid any more. Considering the amount of work that can be done by modern digital cameras and the amount that is done by people with day jobs, we might have to think up another set of labels; paid shooters, non-paid shooters, and not-paid-yet shooters. The last named are the edgiest…* 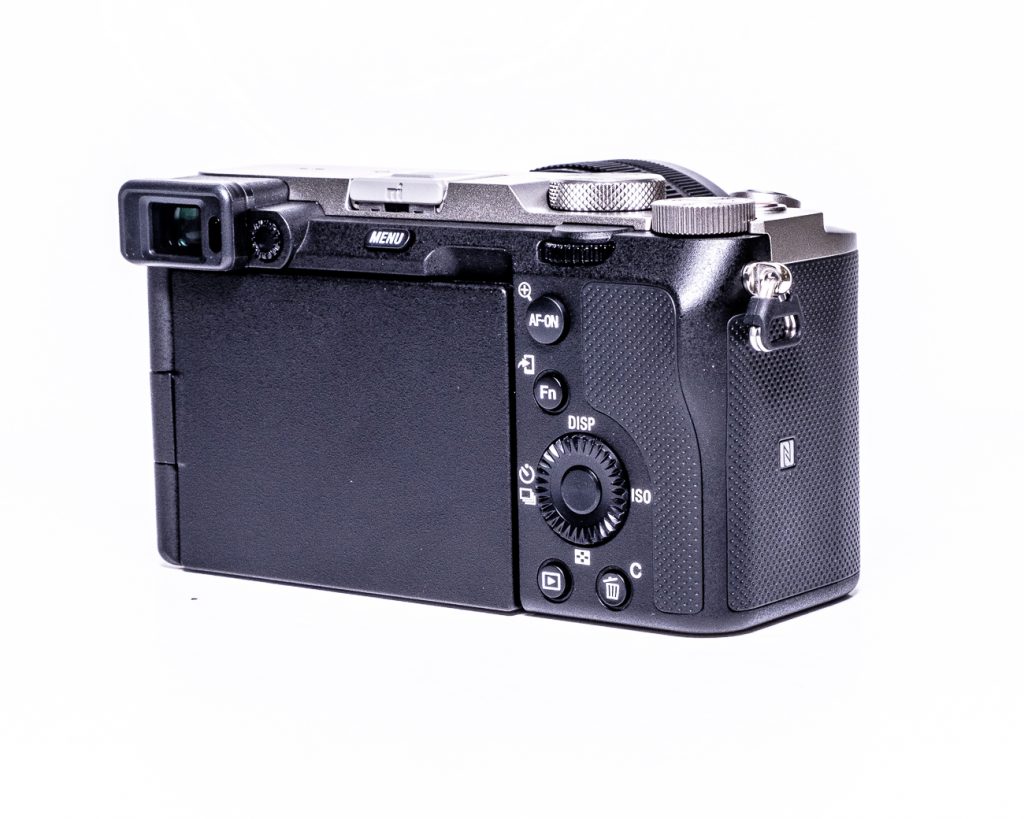 Okay, back to the camera. 24 megapixels, 24 x 36  sensor size, a body size that suggests the APS-C camera family, and a powerful computer processor inside. There is also powerful AF speed, 4K video shooting, and image stabilisation capability. And the power it needs is supplied by a big battery – over 700 shots per charge is advertised. 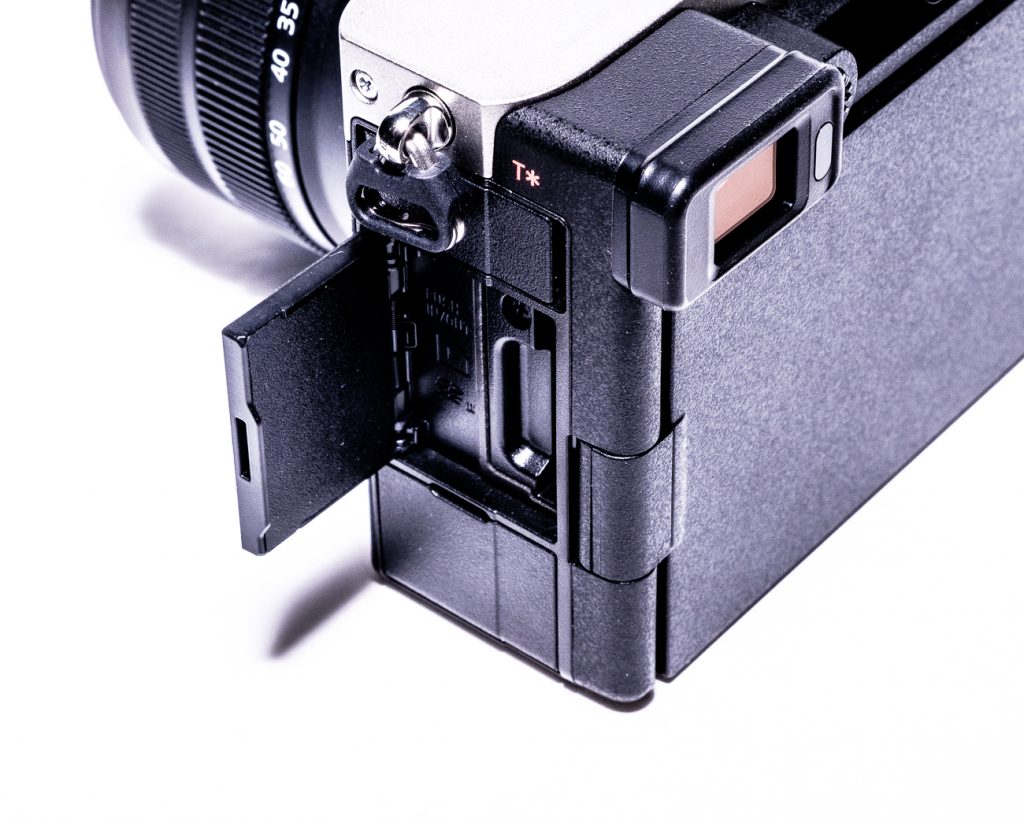 They’ve opted to put the card slot – modern SDHC type – on the left side along with many of the connection docks. This frees up the handgrip for that big battery. And surprisingly, I found the hand grip actually comfortable. 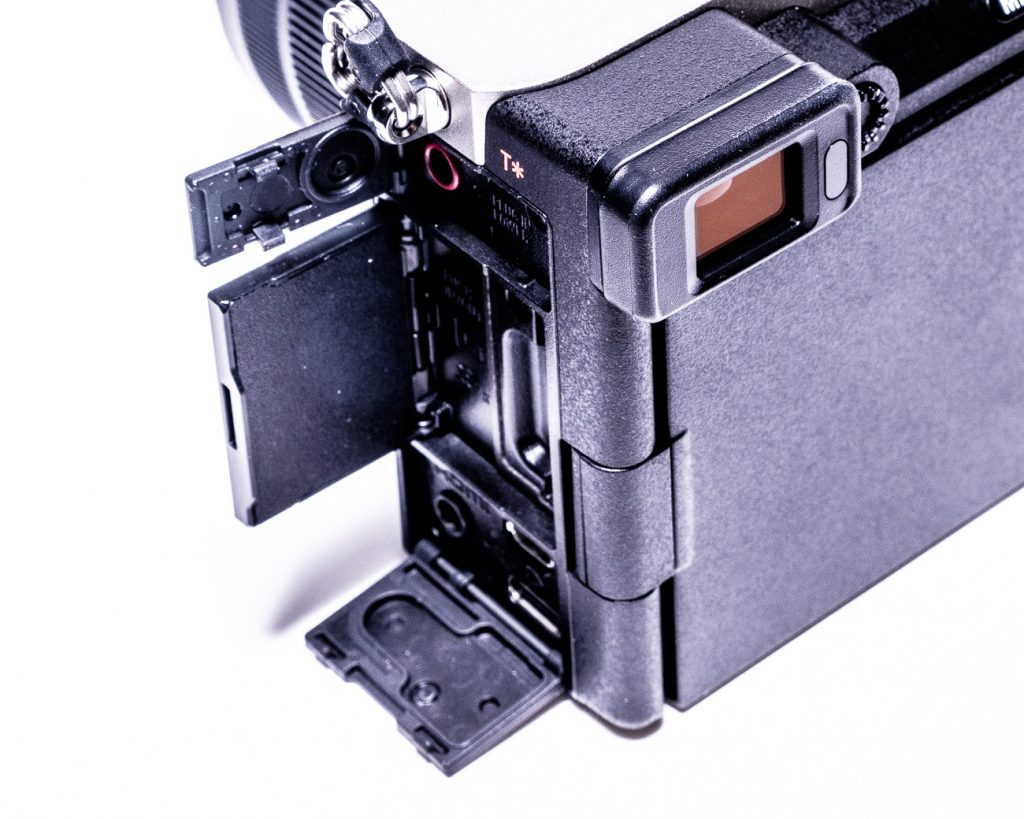 Now I’m a fan of the tilt screen that doesn’t swivel out to the side, but many people using these cameras for video work prefe the side-swing and the ability of the to swivel to the front for self-video. If you’re careful, thatt’s a good system. Note that on the SONY screen it was bright enough and detailed enough to show through the shop lighting and the camera flash. That’s a lot of information on the back to check through, but presumably you can edit it down to a smaller display according to your own workflow. 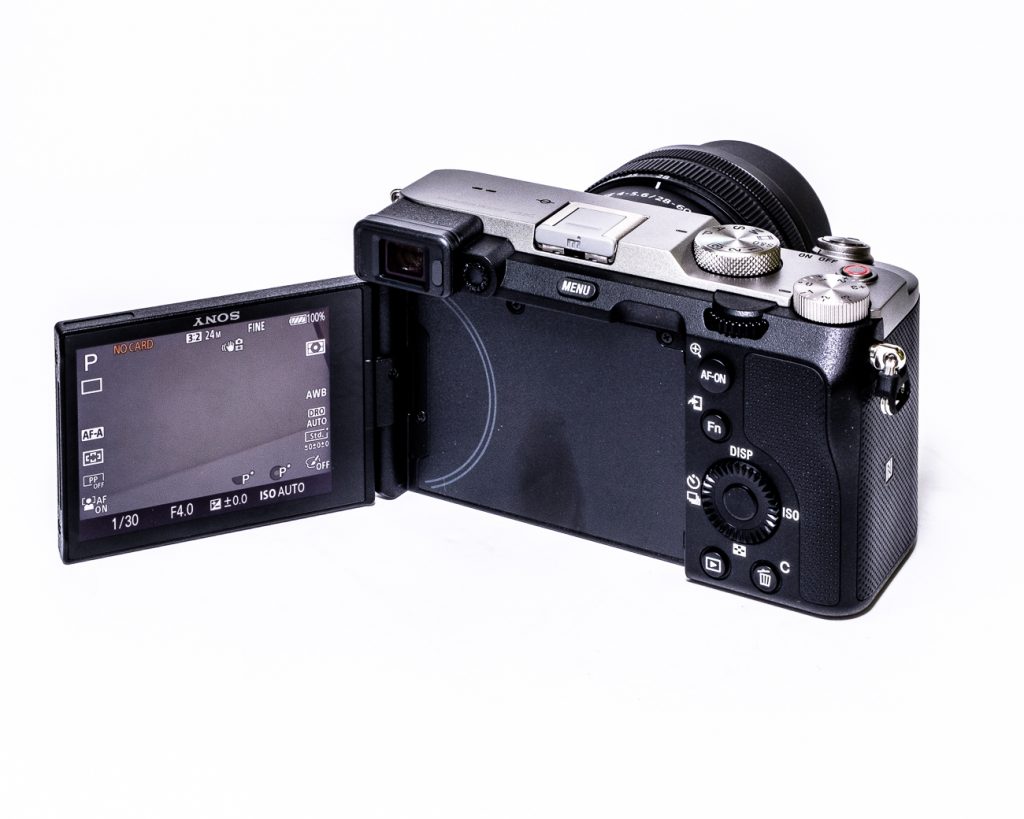 The camera can be bundles with that short zoom lens and this is probably the best alternative if you intend this to be a general use or travel camera. It would certainly do all that the non-paid shooter would need. I write that with the conviction that the non-paid shooter will continuously update what they need…and the Sony company will be right there with the goods on hand. 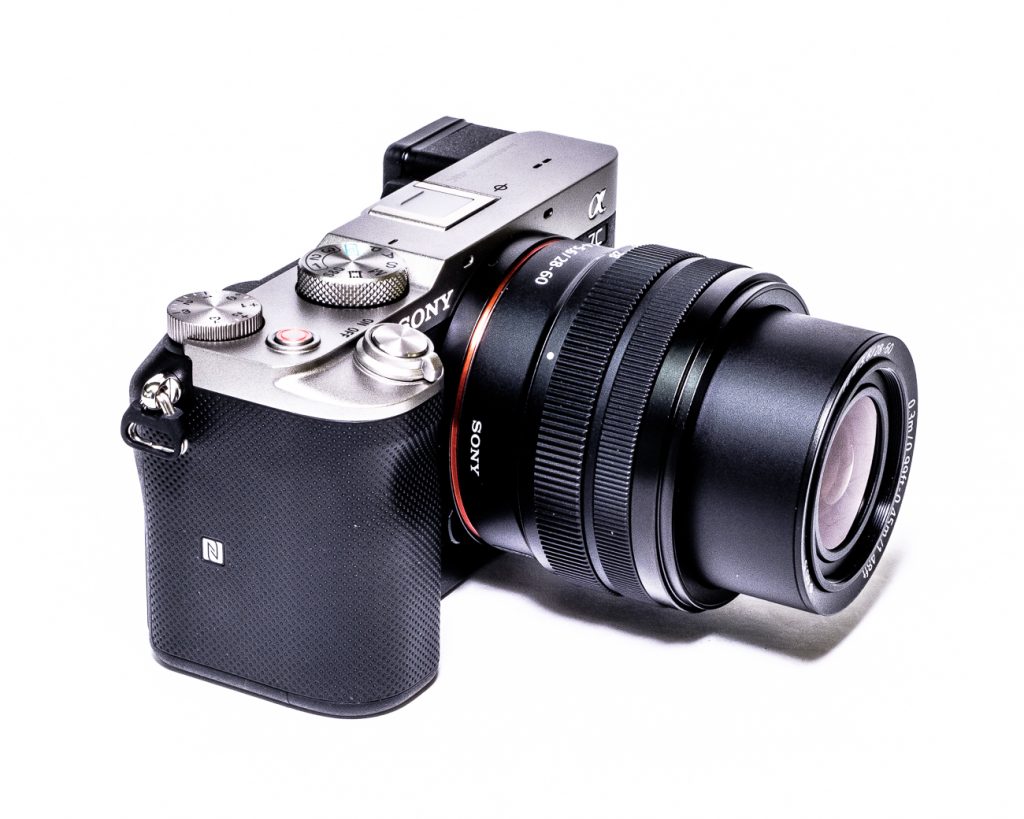 Were I not a dedicated other-system shooter, this camera would be one that would seriously interest me. 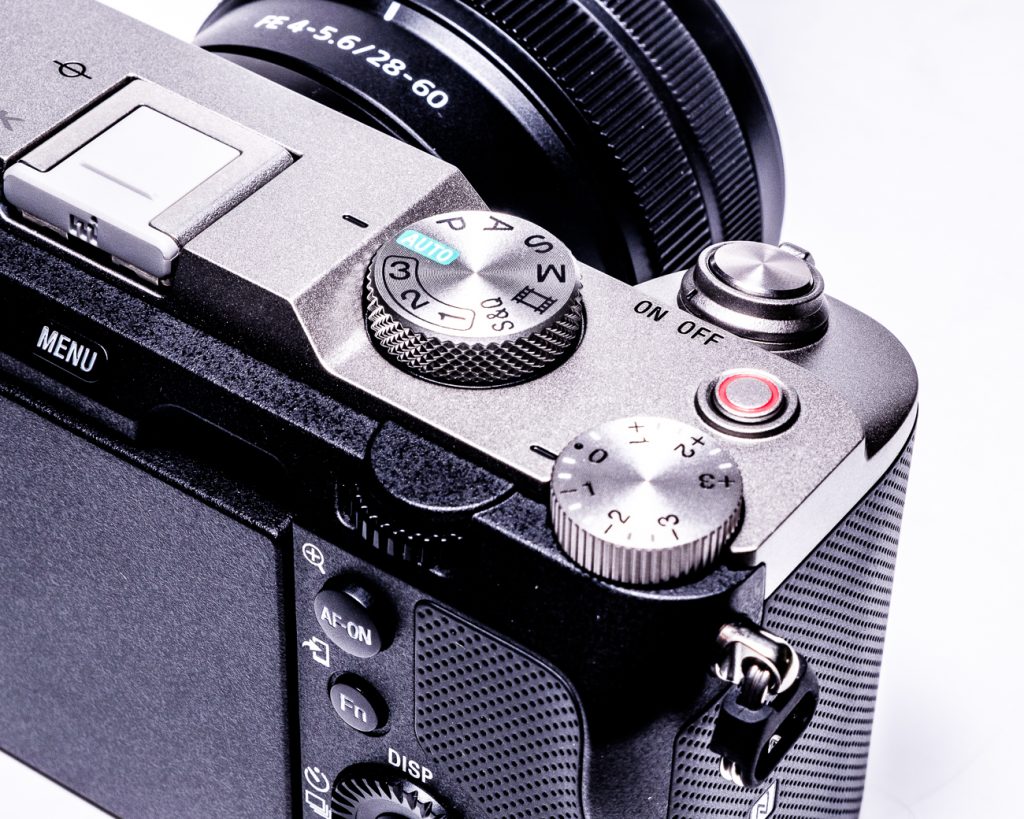 *Note: If you ask me, I am a combination shooter – sometimes paid and sometimes not. But I have stopped being the not-paid-yet shooter. I figured out the game a long time ago and decided that I would set the rules:

a. If it is a paid job, we agree on the money beforehand. Money is a number and we write it down. I do not object to you writing a small number – I’ll just add a zero behind it before we get to the decimal point.

b. Work for exposure? No, no…I work with exposure. Aperture and shutter speed and ISO, mainly, and the occasional bit of focusing thrown in. I used to have a colour space but I cannot find it any more.

In any case, exposure is the sort of thing you get hauled up in front of the magistrate for…

c. Take a few snaps at your wedding? As a guest? Or as an alternative to a real paid shooter who is concentrating on the job, worrying like hell, and doing it properly? If I’m to be a guest my specialty is the Drunken Uncle act – if you want a paid shooter go back to ( a. ) above.

If I am your uncle I’ll stay sober long enough to get through the big group in the garden and the entrance to the reception but then all bets are off. And I’ll be leaving at 10:00, even if you don’t.

d. Free pictures at your dance show? No problems. The best seat in the house, please, and no charge at the door. No paying $ 35 to Perth City Council for parking either. If there is a bar and a food van all the better.

Free pictures will be the ones I decide to take – not the ones you demand. I’ll judge what comes to you in the end, and how it is presented, and if you try to convert free pictures into a free advertising pictures we go back to ( a. ) above.

Fine. You pose as I dictate.

Boys, wheel in the vat of snakes and get ready to run after you take the lid off. I’ll be right behind you. The model will be posing…