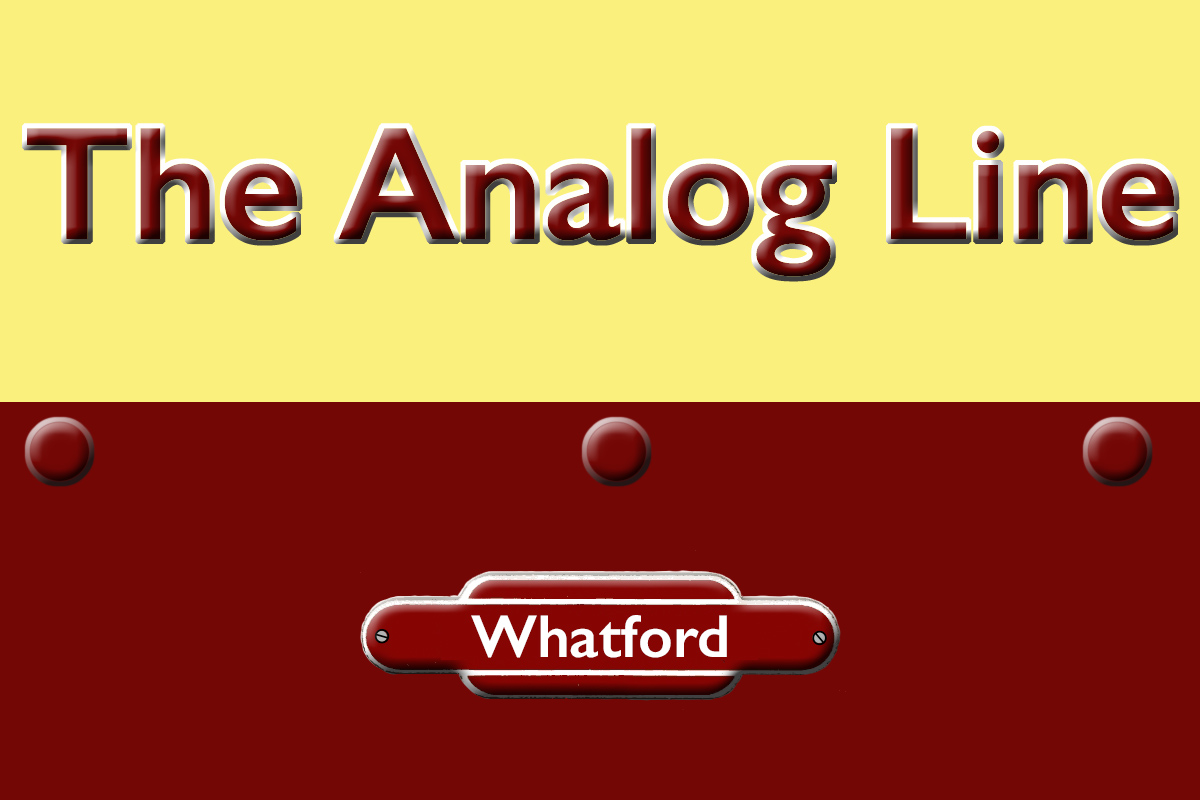 Remember that I promised you six destinations? Well, the first is Whatford.

What is analog photography? What was it before, and what is it today?

Basically, it’s recording an image using chemical means, rather than electronic ones. It was tried over two centuries ago by chemists and experimenters with no means of permanently fixing their image once a lens had shown it. A novel trick, it became a reality when a French gentleman used Bitumen of Judea and oil of lavender to take a picture of some rooftops. And then further French, English, German, and American gentlemen invented faster, better ways to do this…ultimately resulting in the Mickey Mouse camera and Verichrome Pan film…

But it’s all about chemistry. Light-sensitive salts eventually being converted to tiny grains of silver or tiny dots of dye in the pattern of whatever image was shown to them. Eventually they are coaxed into showing you a repeat of that image on a flat surface. If it’s still, it’s photography – if it’s moving, it’s cinematography. In the first instance you can sell single images for thousands of dollars – in the case of the second, you can get people to visit picture theatres and pay thousands of dollars for chocolate-coated ice creams.

Most of the time analog photography can be done with whatever light source is available; sun, moon, electric light, flash bombs, etc. It can be done in colour or in black and white. If it sounds like digital work so far, here is where it diverges – Digital shots are most often in colour and you can choose to make them monochrome. Analog is a choice you make before you shoot the shot and you don’t get an easy way to make a changeover afterwards. You need to get good with what you got.

Analog photography involves just as much post-processing as digital work, but it is messier and stinkier. It needs more construction before you can do it and it is hard to make it a portable activity. Conversely, you can hand the responsibility for nearly all of the post-processing off to professional firms and they’ll make the images for you. Indeed, for some forms of analog, you are not really going to have a chance to do your own processing.

Analog work can be converted to digital work at a certain stage of the procedure – and many people choose to do this to take advantage of what digital can then do. Some eschew this, feeling that they are more authentic and moral in a wet darkroom. I make no pronouncement on that, having worked in professional darkrooms as well as my own amateur ones and listened to what the darkroom workers are talking about. I’ve dabbled with simple, safe chemicals and coped with hell’s brews that were a very bad idea at any time. And I’m now typing this column in a warm, dry computer room with a cup of coffee. I can see and there’s clean air about me, so you can take a guess where my vote goes…

Analog is now done on older cameras and with materials that are becoming rarer. Its ancillary equipment is sourced in the secondhand market. It has a knowledge base that is vast – the literature of two centuries to read and absorb. It has failed companies and closed markets. It is trendy and quirky, and like real ale, can be the plaything of strange fat men in tee shirts. I know – I used to be fat and I still have many of the tee shirts. In the case of the ones used in the colour darkroom they are covered with chemical burn holes.

The one saving grace for analog photography is the fact that it has passed the point of being scientific and commercial and cutting edge and has gone on to being artistic and nostalgic. Experimenters are free to take it anywhere else it can be led. They need not be successful or good or fast or fresh. They can just have a darned good time with it.