Coming To Grips With The New Nikon 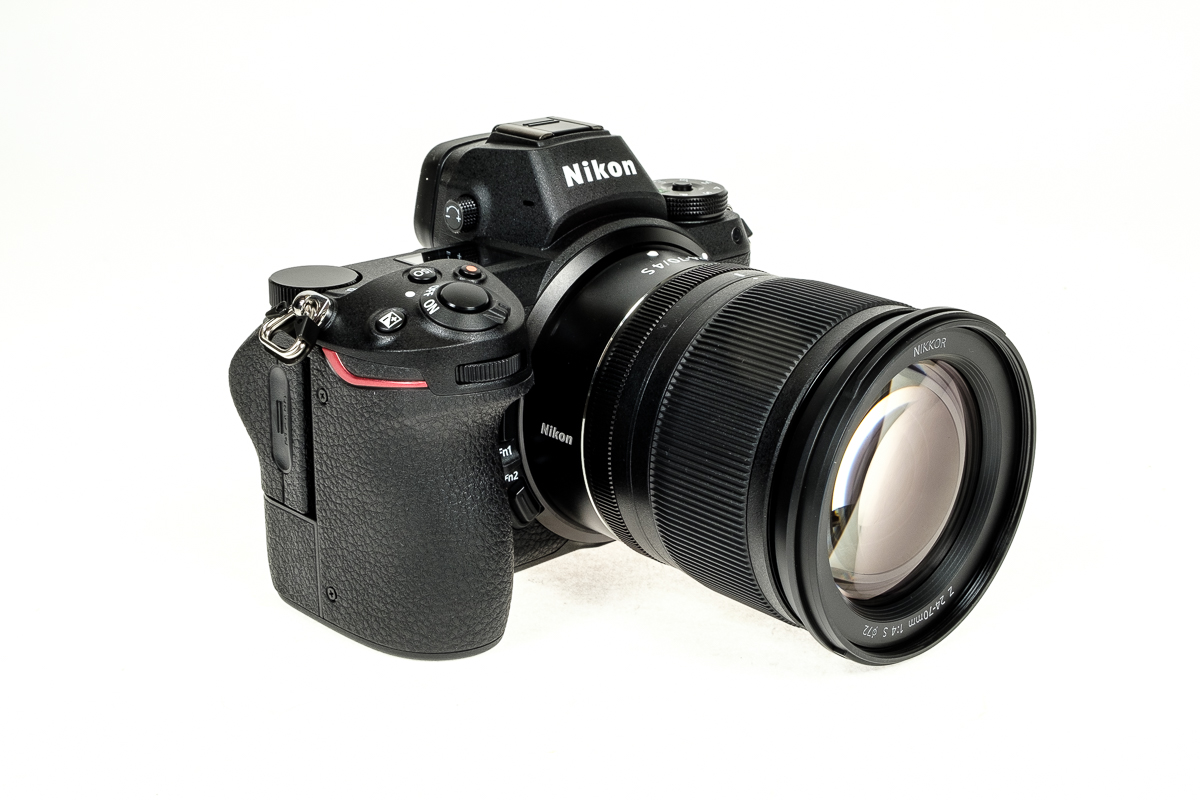 11 Dec Coming To Grips With The New Nikon

Aha! I have my hands on it at last – the new Nikon Z7 mirror-less camera and a suitable lens for it. The Camera Electronic Rental department has just taken one on charge and I got it for the day – with a new 24-70 lens made especially for this new lens mount. Plus a bonus in the bag. 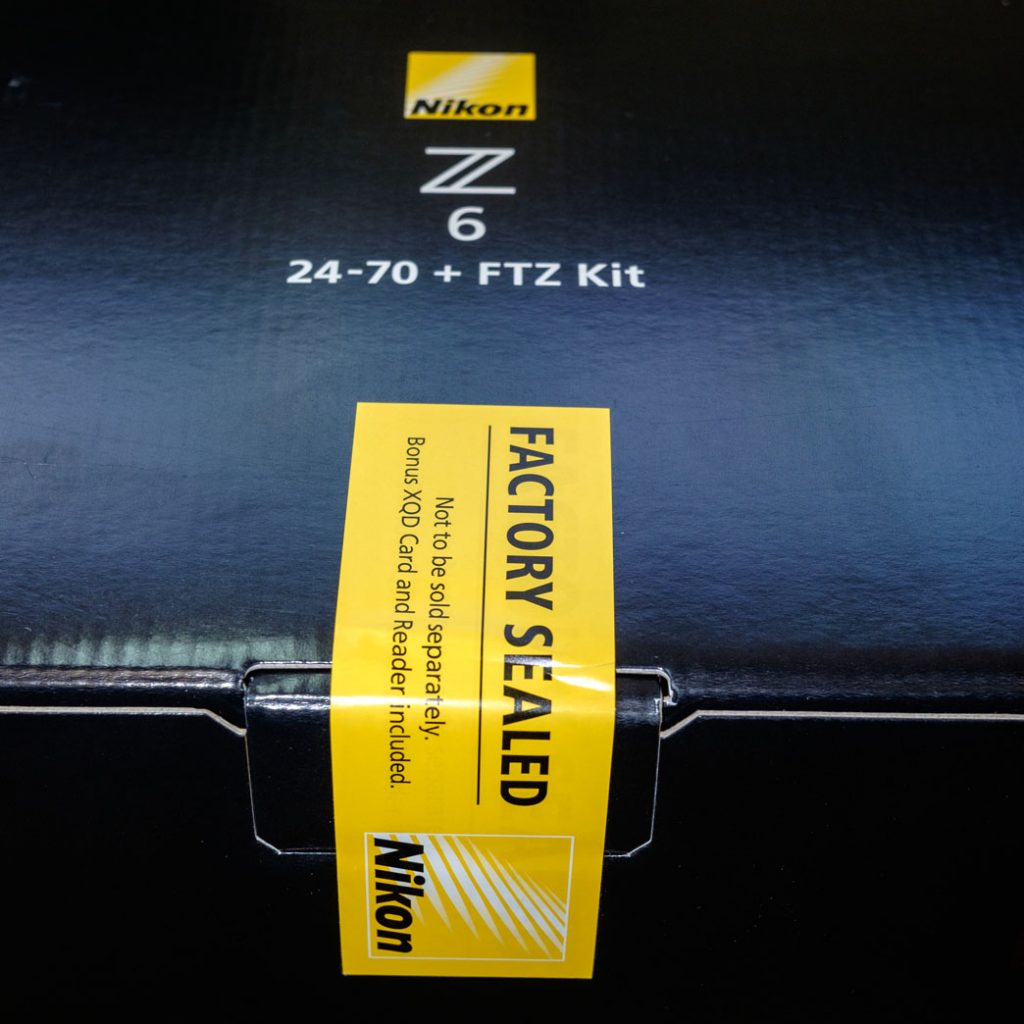 Note that I cannot do an unboxing for this one. Nikon have put a plastic guardian at the gateway to the goodies, and there is no knowing how they have stacked it inside. I’m guessing it’s probably packed pretty well in there and they haven’t had to resort to excelsior or old socks. Had that seal not been on the boxes, one of my problems would never have arisen…but more on that later.

The Z7 body – the slightly more sophisticated model of the team – is a handsome thing, smaller in most dimensions than the equivalent Nikon DSLRs, and well built. There is a solid heft to it, so do not imagine that you will be losing that much weight in shifting over to the new system – your main gain will be volume of space. The body is right-centered though not to the same degree as its new main rival. The RHS grip is what I would describe as a 2 1/2 finger one and has a good depth to it. You need your fingers free in the channel between the grip and the lens because you’ll be doing things with them. You can admire or ignore the red accent line there as that is just styling.

What you can’t ignore is the feel of the rubber of the grip and body covers. Nikon rubber is soft and you can hold it securely, but in the past there have been episodes where the rubber panels have reacted to some people’s sweaty fingers – then swelled up and detached from the cameras. This is not exclusively a Nikon failing, but we hope that sufficient time has passed for the factory to come up with resistant grips. 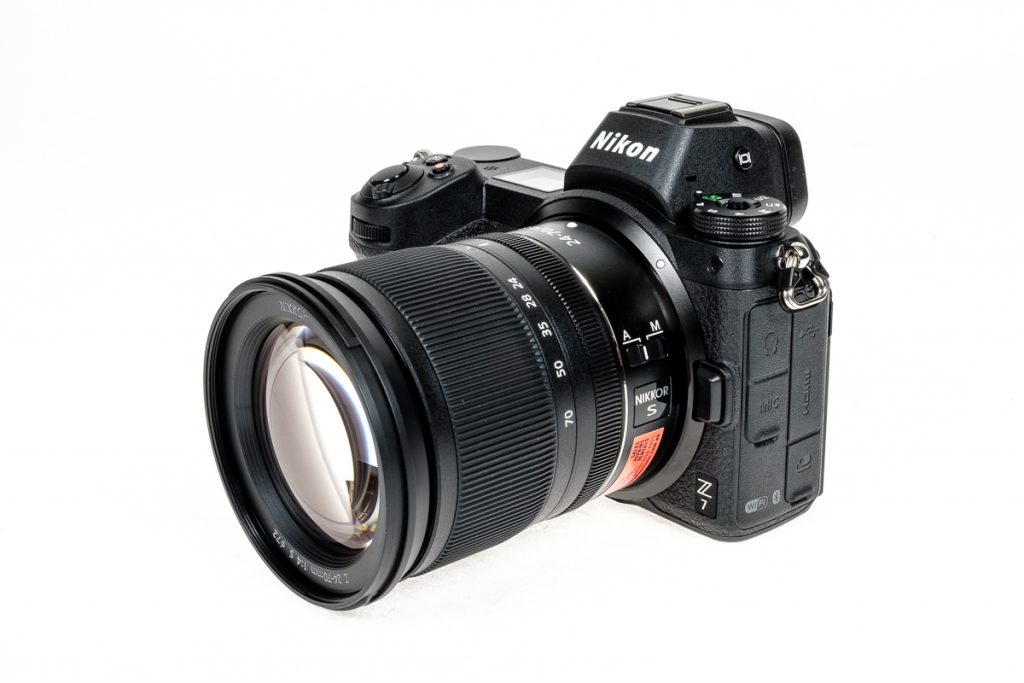 The left hand front of the camera has the mount release – Nikon have sensibly kept the same orientation for their lenses – and note that the lens has only two rotating rings – zoom and focus. There is a detent stop position on the lens that locks the lens into a retracted position – the little white dot on the zoom ring – and shuts off the operation in the camera body. You need to rotate it to deploy the lens. The lens is all-electronic contact and the new mount engages extremely smoothly. 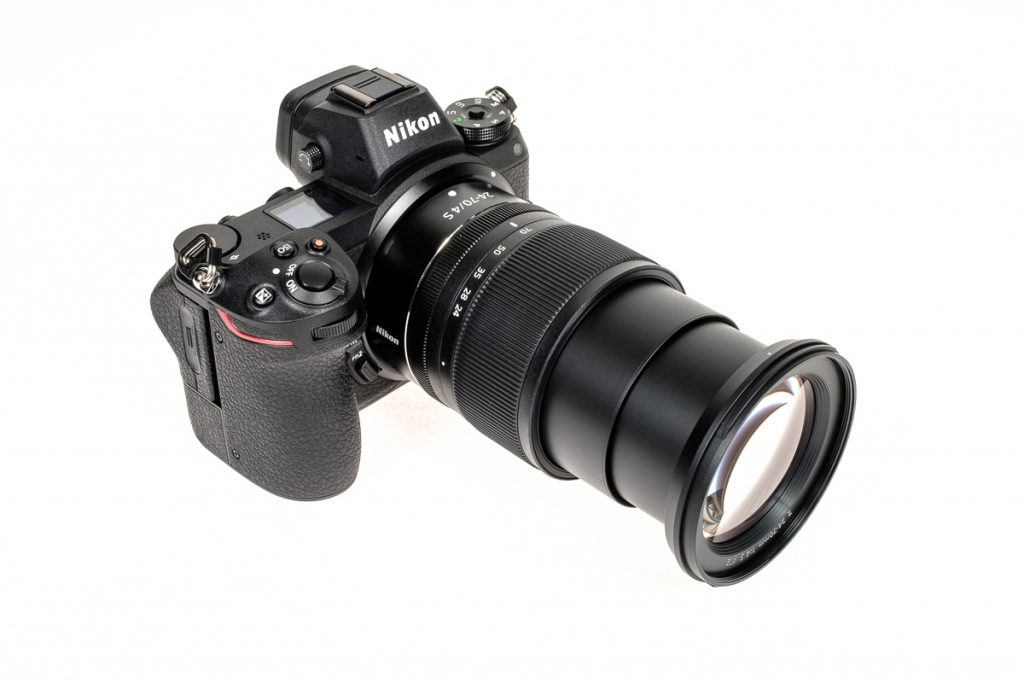 The left rear shows the two familiar arrow and trashbin symbols for playback. Plus there is single-axis movement of the hinged LCD screen. I am spoiled by a two-axis hinge for my studio Fujifilm X-T2, but I still prefer this Nikon design to the side-swing of other cameras. I’m afraid I have seen a screen taken off by a clumsy movement one user made. On the other hand, those side screens can be swung in, reversed, and the sensitive surface of the LCD protected next to the camera body. It’s a user-preference thing. 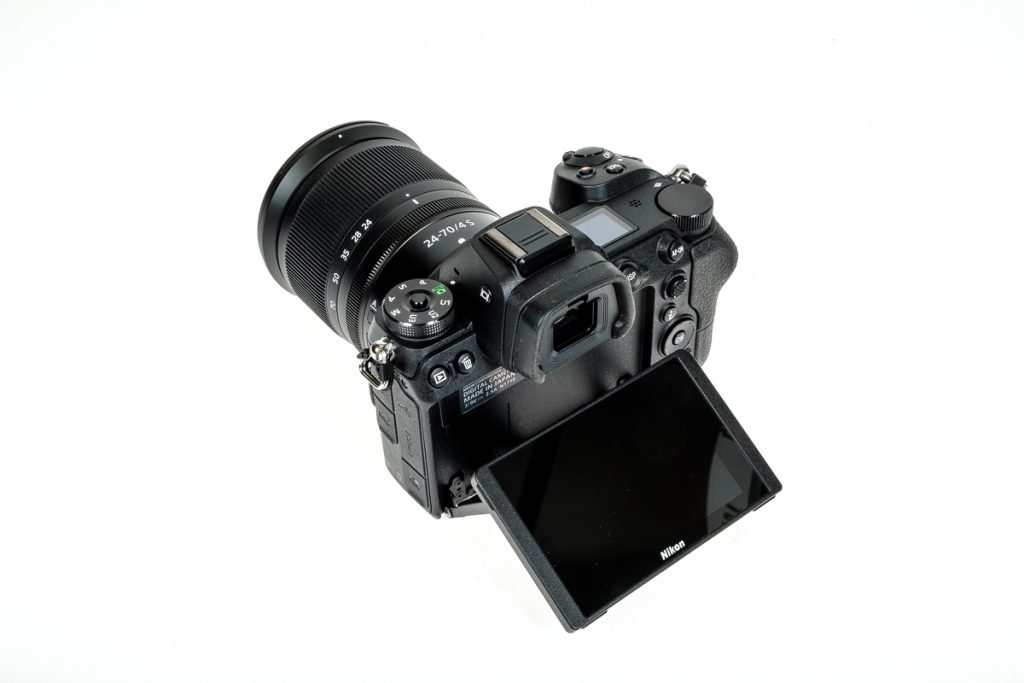 A Little Studio cheer for the locking mode dial on the left. You cannot slip out of one mode into another unawares. A Little Studio Bronx cheer for the continued siting of the on-off switch and the front control wheel near the shutter button. I changed settings inadvertently several times while just grasping the handgrip. 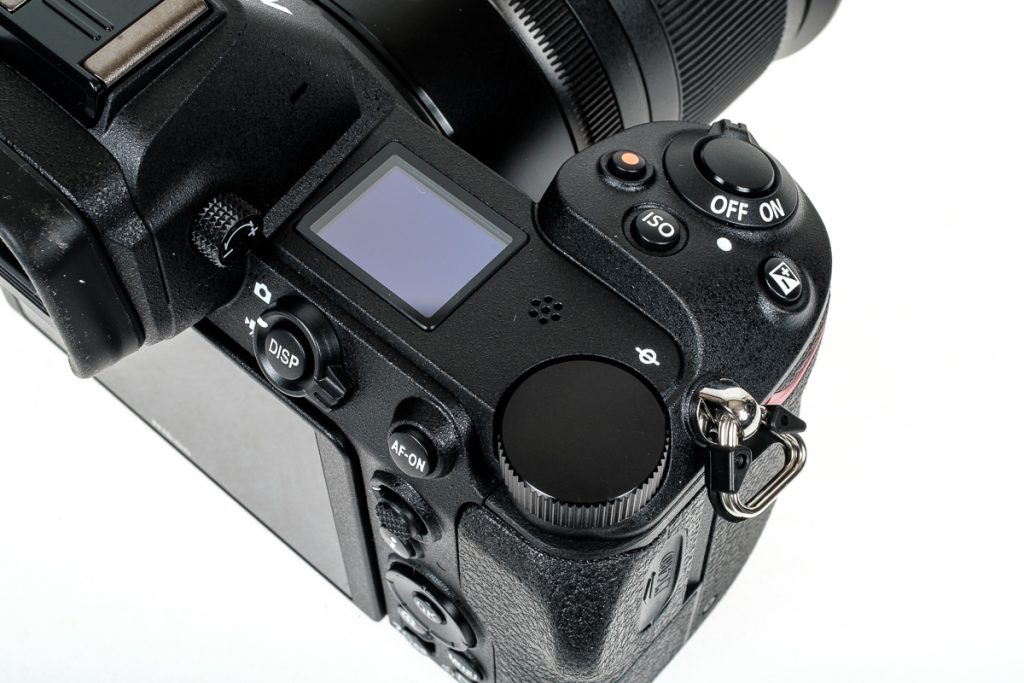 The rear control dial is fine, as is the AF-ON button and the orange video button. These are where we expect them and can reach them easily. A particularly loud and genuine Little Studio cheer for the thumb joystick that operates the AF target choice pip. This is variable speed and, as the Nikon Z7 has an additional choice in AF selection of ” Micro Target “, you can get the exact spot you want in no time. I switched the camera to this micro target as soon as I found it in the menu and didn’t take it off. 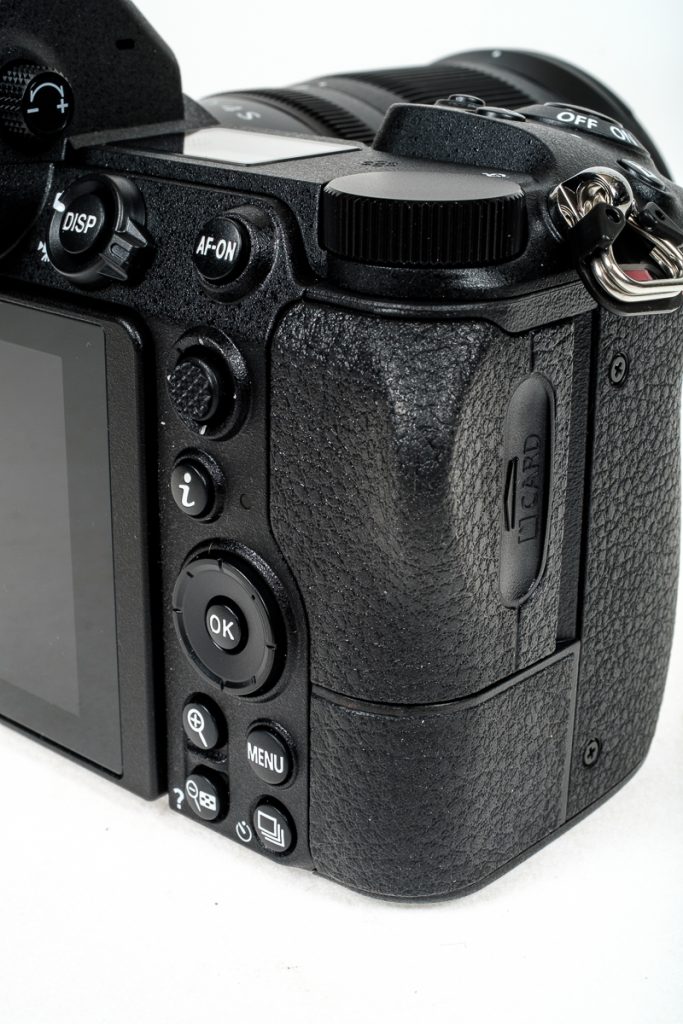 It’s all there, but moved from the old Nikon orientation on the DSLRs – they had much of this on the left-hand side of the body. I am always grateful for a maker who will put a ” Q ” or ” I ” button somewhere in easy reach – it shows a précis screen on the back that will let you check the most important settings you’re operating on at any one time – and most makers allow you to change these with the controls while watching that screen. Menus can be daunting things ( and to be honest, even though I was a Nikon user for years, I find their menu a little tougher to grasp than others ) so when you need not go into one and start button-scrolling it means you’ll have more concentration on the actual scene you’re shooting.

Of course, that is also the theme of tomorrow’s column – concentrating on the information. I have words for the camera makers that may ring a bell with you.