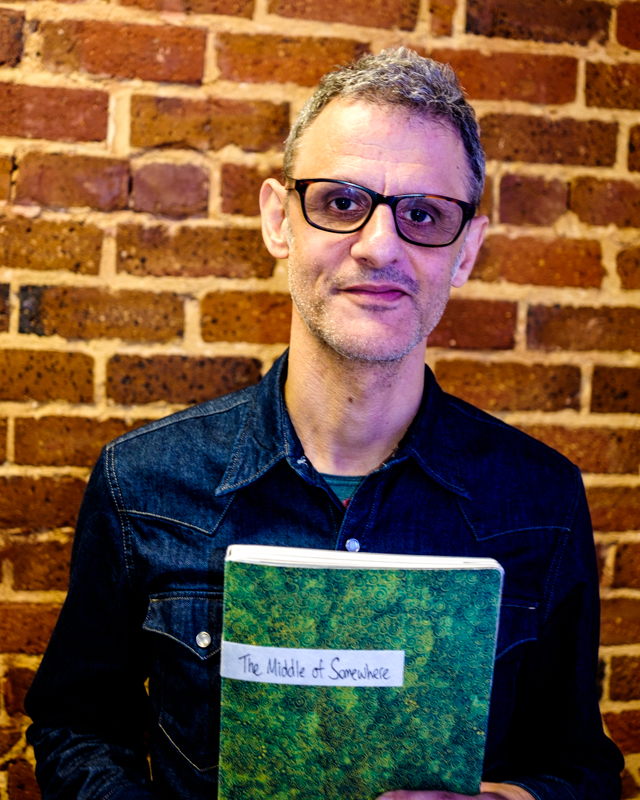 No, you can’t buy this book of family photographs. It’s the publisher’s proof – the only one left after all 600 copies were sold.

600 copies of a family picture book? Who sells that many?

Sam Harris. The English photographer who gave us a Shoot photography talk last night. It was a ripper of a talk on a cold Sunday night and well worth listening to – not least for those of the audience who might have been thinking about their own photographic or photo book career.

Sam detailed his start in film photography, his initial successes in record and CD cover work in the UK, and his assignments throughout the world for editorial work. Yes, he did get to go up in that helicopter with Mr. Lydon, the chap in the striped shirt you saw in the advertisement, and no, he was not ill on him – though apparently it was a close-run thing.

He explained the journeys of discovery he and his family had made in India and Australia prior to coming to WA and showed some of the experimental work he had done with photo book publishing. He seems to have tried quite a few firms here and overseas in an effort to find the best designs and modifications. Not just a case of a one-time upload and then hope for the best deal…and his work paid off in an award in the new book category for “Postcards From Home “.

Then a new idea – he lives ” somewhere ” in the bush with his family and set about taking a full new book of their lives. Unlike many photo book makers, he elected to document things in full colour – and used a variety of small portable cameras and phones to do so. I was pleased to hear him praise the Fujifilm X-100s camera… He’s a man for the spontaneous shot however it might be gotten, but the next stage of the process – the computer work, printing, proofing, and book design is any thing but casual.

Conferences with designers and publishers, layout of the imagery in large paper form, constant revision to smooth the rhythm, colour, texture, and text. Input from the whole family, and clever design elements taken from their artwork to form the cover. Even tip-in pages contrived to echo real communications within the family. And it was significant that Sam said he is not one for a great deal of captioning – he lets the images tell the stories. The title of the book was ” The Middle Of Somewhere “.

Result? He’s on an overseas editorial shoot when his publisher contacts him to say that the book has enabled them to win a prestigious 2015 Lucie photographic award for limited publication book. Better than that, it doesn’t get.

But wait – there is a new book shooting right now. Images are being gathered from all round his neighbourhood. We saw a couple of them as early previews and they are magnificent. Sooo…

So when the new book is out, rush to get a copy. You will not be disappointed.  If you want to make sure you’ll be one of the lucky ones, perhaps even think about contacting Mr. Harris or his publishers – Ceiba – and they can turn the handle on the press a few more times.