Look Carefully At The Lettering On The Box…

16 Jul Look Carefully At The Lettering On The Box…

Yes, this is the new Fujifilm camera; X-T100. Gotta look intently at Fujifilm packs because they are all so very alike. And the people in the company who name the new products often get the letters and numbers frighteningly close to the old designations. It pays to peer closely. If I’d been more casual about it I might have mistaken this for the X-100 or the T-T10. The internet is no help – a Google search often turns up a mixture of old and new posts that can send you out past where the buses run in short order.

Well, with the box at home, the package opened like most other Fujifilm gear – well packed without being buried in frustration and sharp edges. I assembled the lens and camera and dropped in a charged W 126 battery and away we went. The beauty of Fujifilm now is the standardisation of the battery requirements – no more hauling three chargers in the suitcase for three different levels of performance. 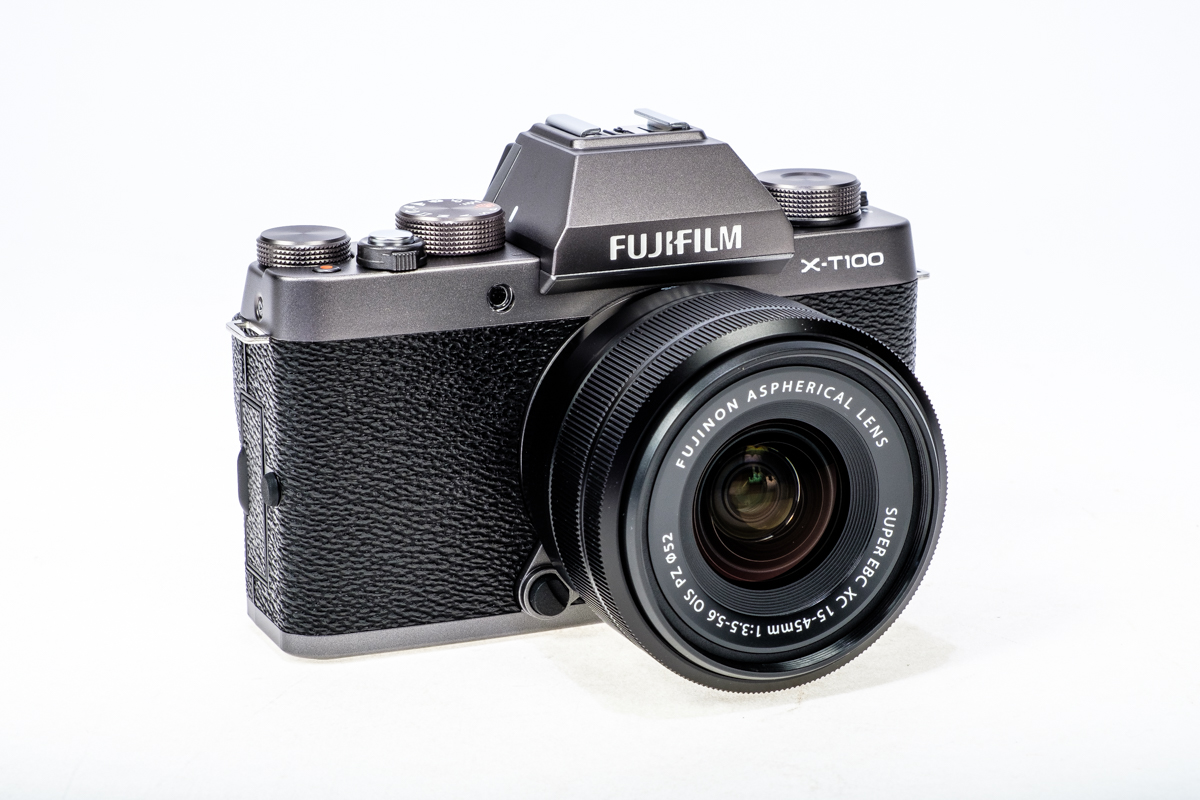 The body is sleek – in this case the graphite shade that hovers between silver and black. I’m willing to bet that if this camera sells in any significant numbers that Fujifilm will release it as a special edition with a brown leatherette covering paired to the silver finish. I have no idea whether or not we’ll ever see the 15-45mm lens in a silver shade here in Australia, though it’s a possibility in Asia. The target market for this camera as stated by the company is the Asian market – for people who wish something up a bit from their smallest X-A5 mirror-less but who do not want to pop for the X-T20.

It is a camera and lens combination that carries economic and operational decisions – they want a modern ergonomic experience for people who would otherwise swipe and poke on a mobile phone – but they realise that they have raised the price bar for their products somewhat in the past few years and need to ratchet down to get the entry market. If you think of this, the combo is floating somewhere between the X-A5 and the X-T20.

It floats with different features, however. Bayer sensor, multi-articulated LCD screen, widespread electronic connectivity, as well as the particularly easy/hard PASMWhatever interface that Fujifilm used on their earlier X10-X20 cameras. I recognized the dial settings from this, though the operation of them is so much better than before. 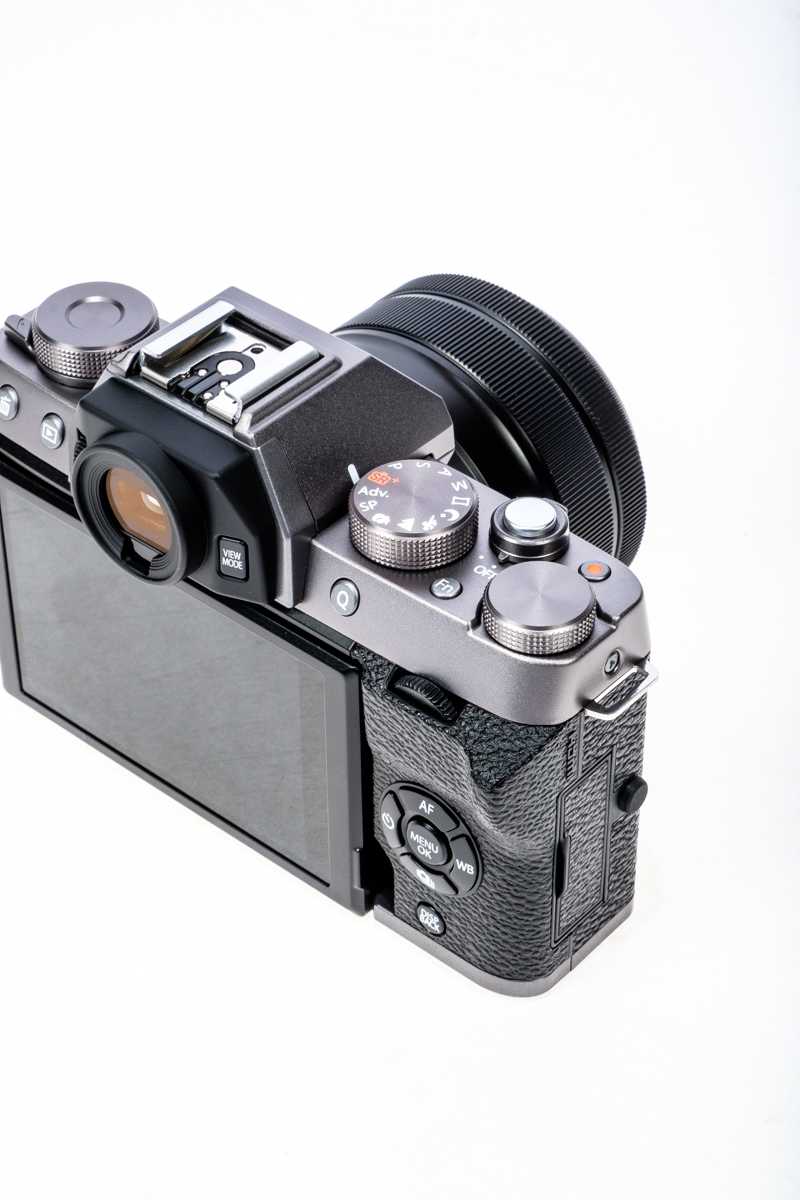 If this seems cynical…it is. With this form of upper dial you get PASM plus SR+ plus Adv plus SP. And a mountain, a face, a running man,  a moon and star, and a stretchy rubber sheet.

a. PASM is easy – program, aperture, speed or manual. We can find this everywhere except other Fujifilm cameras that do it with more dials in the retro fashion. In my case the M stands for maniac.

b. SR+ is the camera deciding it knows what you are doing through some arcane scene analysis – it will crank in speeds, ISO’s, apertures and possibly mood, depending on internal instructions. If you do not agree with the camera and are determined not to be cowed by it you can go to SP or P. Beware – if you defy it too many times it will remember and exact its revenge later.

c. SP is scene choices  – in addition to the mountain and running man, you can get a cocktail, a beach, fireworks, and  a sunset. Quite frankly, this camera has a chance of a better holiday than I do. I might as well see it aboard the cruise ship and wave from the dock…

d. Adv is Advanced. Other camera makers have similar programs that they refer to as ” Art Filters “. They make jpegs with effects added. Art they may be, but the results are unlikely to be hanging in the Louvre with a long line of tourists queuing to see them.

e. The stretchy piece of rubber symbol is for the panorama mode. Press the shutter button and twist about 120º or 180º for a pretty good jpeg pano. This one actually works. 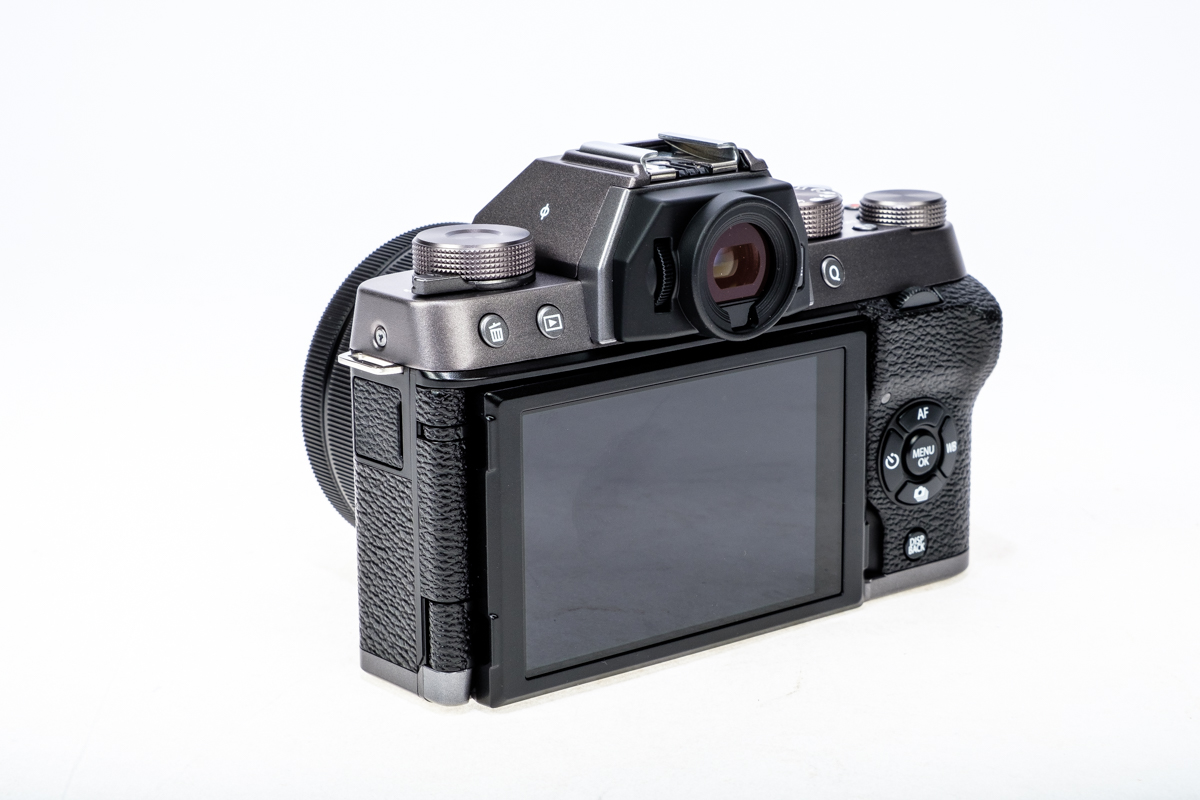 The camera body itself is more plastic than some of the other Fujifilm offerings but this means it is a bit sleeker and a little lighter as well. If it ditches the old mechanical connection for a cable release, it at least has an electronic socket for this. It adds a multi-functional dial on the left top of the upper plate for all sorts of programmable functions – I just left it as default, which turned out to be perfect for the SP and Adv programs – you got to see what they were doing on the back screen as you twisted it about. It’s an encouragement to use these modes more and more.

One classic Fujifilm control that has shifted inside is the Single, Continuous, and Manual focus lever that seemed to be down on the left front of everything else. I missed it until I searched for the control in the menu. It’s surprising how often this gets used in practice – I kinda wish they had kept it in the original form.

And for those with sharp eyes who spotted the black bump on the right hand side of the camera – that’s a rubber cap over a screw socket that takes an accessory grip. The thumb bump at the back is pretty near perfect.

Final style note: see how they have changed from the classic single pillar attachment point for the strap via a D ring? Now its a broad slot ring. Probably cheaper but equally valid. In fact I think I like it better.