26 May Canadian Wilderness – A Travel Tale By Stan Davies

CANADIAN WILDERNESS
If you want an Indiana Jones experience, then a trip to the north of the Hudson Bay in search of the elusive Musk Oxen will have you transported in time. Following the long flight to Montreal via Vancouver, the real adventure begins. From Montreal a 3 hour flight on First Air – an Inuit owned and operated airline – will have you alighting in the remote settlement of Kuujjuaq. Here your legendary guide Tundra Tom meets you and briefs you on the upcoming adventure. From here we head out to a tent campsite approximately 80 km north of Kuujjuaq that will be accessed by floatplane. Tommy May the bush pilot knows this region like the back of his hand and after an exciting take off from the lake we are soon over the tundra landscape spotted with hundreds of freshwater lakes. Several Musk Oxen herds are spotted on route to our campsite. The landing is sensational as Tommy descends onto the lake and taxis to our landing. The supplies and camera gear are unloaded and we move into our tents, home for the next five days.

SEA PLANE
As the plane banked and pointed into the wind for the landing we could see our home for the next five days nestled on the bank of the fresh water lake. Legendary bush pilot Johnny May made a perfect landing and we taxied into the beach. After all the gear and supplies were unloaded, I was keen to get a photo of the seaplane. I couldn’t believe my luck when I saw the husky pup curled up to avoid the chilling wind and the boots near by, if I could bring these together with the seaplane it would tell a story. Getting down low to capture the pup’s face was important and I had to move quickly as with all the action happening the pup wouldn’t stay still for long. I fired off six or so shots changing my perspective slightly each time. Finally I settled on this image not realising at the time that our pilot Johnny May was climbing into the cockpit and it just put the cream on the cake so to speak. 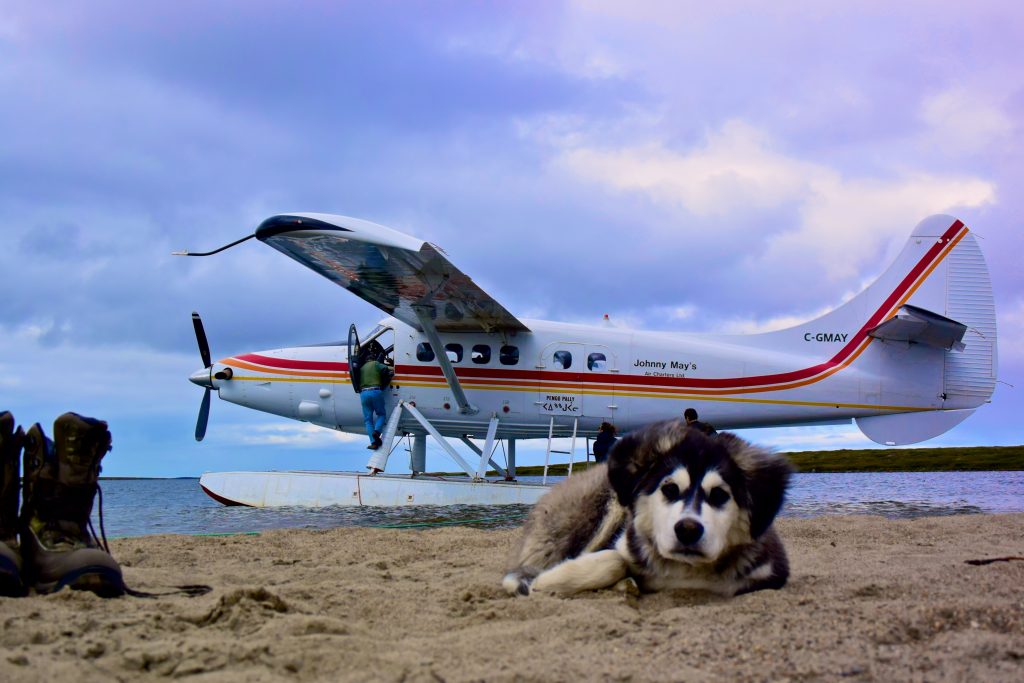 MIRRORED LAKE
Being so far north the sunsets last for a good 30 minutes giving you plenty of time to set up and experiment with composition and exposure times. The landing provides good foreground interest and noodle like foam curled around the pylons makes for an interesting inclusion. With images of water I like to have exposure times greater than 20 seconds to create the milky effect on the water and have my f stop set at f16 or greater which means a tripod is essential. When shooting landscapes with brighter sky than the foreground, I find a graduated neutral Density Filter helps balance the exposure. This image is right up there with my best lake shots and it definitely has the WOW factor, it would look good hanging in any office or living area. 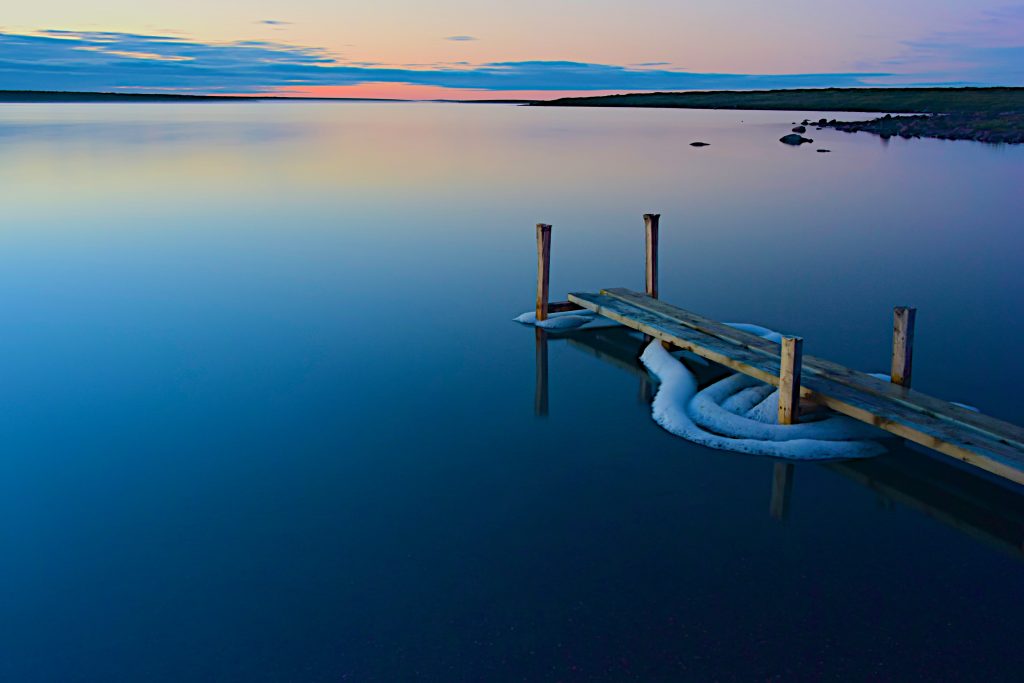 MUSK OXEN IN ROCKS
You would think finding such large animals as Musk Oxen in herds of twenty or more would be easy, but this is not the case. They blend in with their surrounds and often you unwittingly come upon them behind a rocky outcrop – this can be dangerous if you startle them. This day we must have trekked for a good three hours before finding this herd. Which brings me to the point of camera gear, the Nikon 1 V3 mirrorless camera loaded with all the latest features is the ideal camera, weighing in at just 324g and with the professional range of lenses to compliment, it is a no brainer. Others in the group were lugging large DSLR cameras and massive lenses which had only a third of the optical range of the Nikkor VR 70-300mm f4.5-5.6 equivalent to 189-810mm in 35mm format. On this occasion I had my camera set on programme mode, with the changing light this allowed me to concentrate on my composition knowing the exposures would always be perfect. What I particularly like about this image is the positioning of the muskoxen amongst the lichen covered rocks and the nice out of focus autumn tundra in the background. 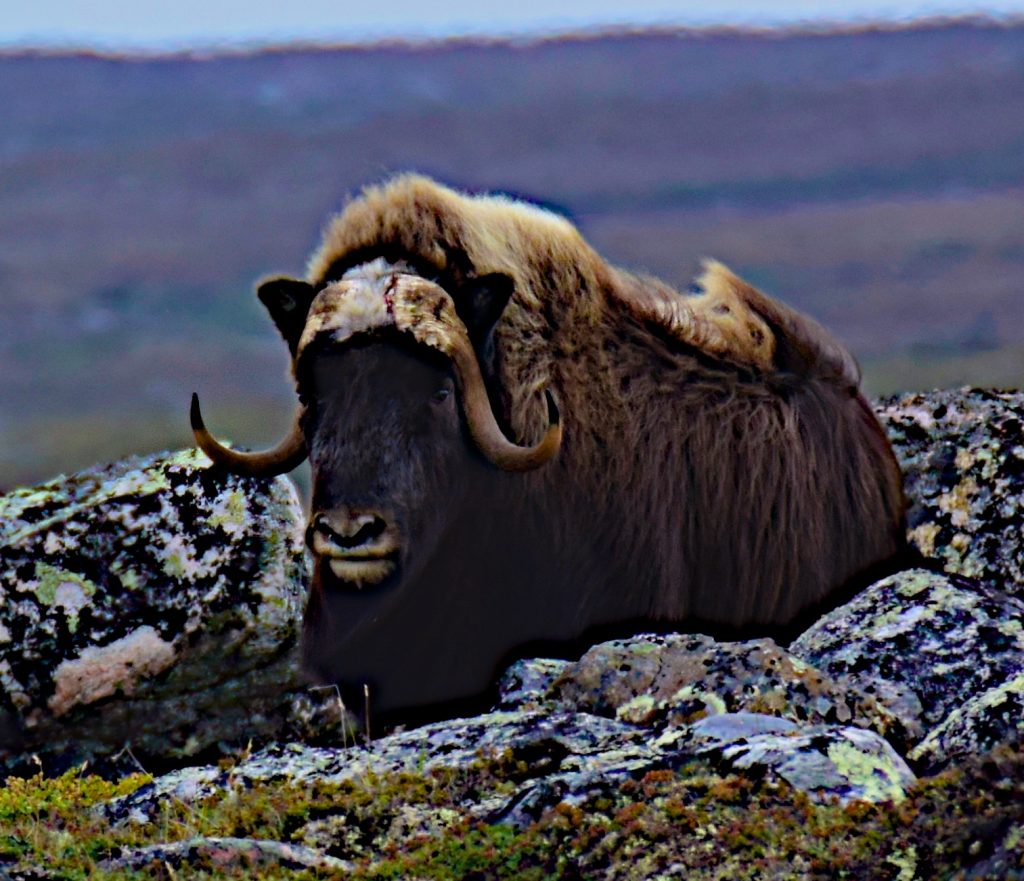 SKELELTON
This skeleton could have easily been a scene from prehistoric times as this region is virtually untouched. The ancestors of today’s muskoxen came across the Bering Land Bridge to North America between 200,000 and 90,000 years ago. A low profile was the best way to capture the skeleton, after moving around any shooting from different angles I was not satisfied with the large expanse of sky. I noticed our guide standing to one side so I asked him to stand behind with his rifle and look down. I had to lie on my stomach so as to create the effect of him standing on the horizon, with the sky and clouds as a backdrop. The final image really tells a story and the composition is clean and effective. 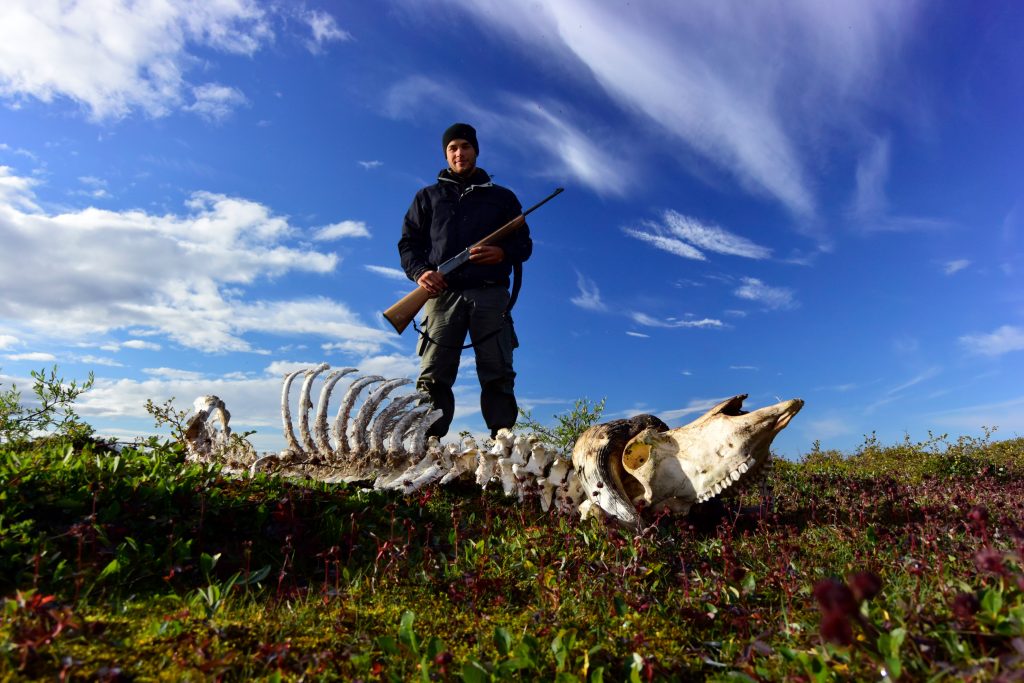 TUNDRA TENT
Our campsite was the most idyllic setting one could wish for with the fresh water stream meandering by with the tent perched upon the soft autumn hues of the tundra. I think I photographed this tent every evening and each time the mood was different. What made me settle on this image was the pattern of the cloud formation and the light on this occasion seemed to be very soft. The shutter was relatively slow at 1/15sec, enough to create a milky surface on the stream and allow greater colour saturation. Composition is good with the rule of thirds applying to the sky and tundra and the tent is nicely positioned on the left third of the image. I changed this image to panoramic format to eliminate unwanted foreground and create a greater sense of vastness.

WILDERNESS TUCKER
At first glance as the name Barren Lands suggests there is no life. Upon closer investigation you will discover the tundra is alive with fabulous coloured ground covers, lichens, moss and an abundance of edible berries ,which we snacked upon during our excursions. I spent many hours over the days getting down close and capturing some fantastic close ups of this amazing terrain. I preferred the images that showed some of the rock from which the succulent ground covers were growing and this also provided a sense of scale. 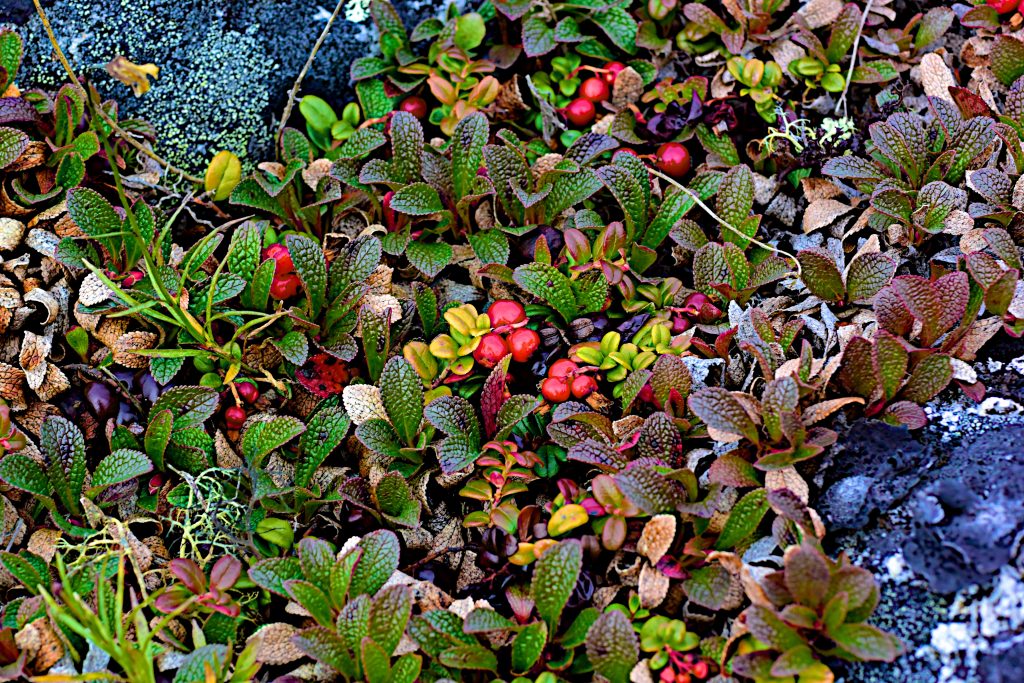 WILDERNESS SAFARI TIPS
When planning for a wilderness photographic safari you have to be ruthless on your kit. If you think you don’t need it then leave it out. Lens choice should be limited to a top of the range 70-210mm f2.8 coupled with a 1.4 times giving you a 98-294mm f4 and a 2 times giving you a 140-420mm f5.6. The other lens would be of the same quality covering the range 24-70mm f2.8 , safaris are not just about animals, there are some spectacular landscapes to be captured. With weight a major factor the new generation mirrorless cameras are a must. My preference would be the Fujifilm XT2, this is a professional camera and you will be amazed by the images it produces. Remember to pack extra batteries. A light carbon travel tripod is a must and something from Gitzo or Manfrotto would be my choice. Finally a tough canvas twill shoulder bag or backpack is essential to take the bumps and harsh terrain.