The Fujifilm Flash Comes Of Age 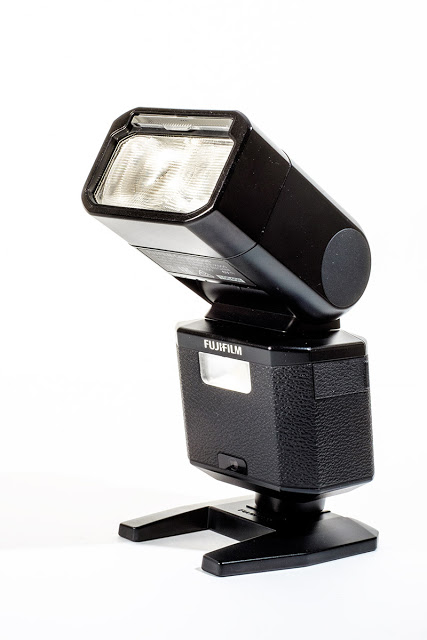 If you are opposed to the use of electronic flash in any form for your photography – for artistic, technical, or cultural reasons, this will be a thin week.

If you are dedicated to a camera system other than Fujifilm, you might also wonder whether you are going to get much on your plate. Have faith – there are a number of good lessons here for you as well that you can apply to the equipment of your choice. The close approximation of some flash systems will let you benefit.

We showed the externals of the Fujifilm EF-X500 flash on the 6th of January this year – the column got a large number of readers. I’ve added a couple of the images to help illustrate this series but this week is dedicated to what the thing actually does – and did – in my studio.

A quick basic recap for those who don’t want to plough through the Jan 6 post: the flash is a classic TTL hot-shoe electonic flash with more power than the previous Fujifilm offerings. It contains provision for commander and slave operation, manual working, and multiple-flash ( high speed ) applications. It has a video light built into it. It is dedicated to the Fujifilm X-series of cameras. And up until this week I had only ever fired it once in the X-system. 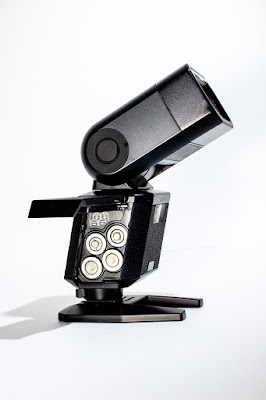 Okay. First test was to open the battery compartment and put in four AA cells. Don’t laugh – some manufacturers make the battery door so thin and cheap that you hesitate to get your nail in there to prise it open. No such problem with Fujifilm, and they have had the good sense to make the stacking order in the compartment simple – batteries down in the front two wells – batteries up in the back. It means you can change the blessed things in the dark without having to see some little diagram. As well, the design of the casing means the whole flash will lay on it’s left side on a flat surface to do this – no juggling act. 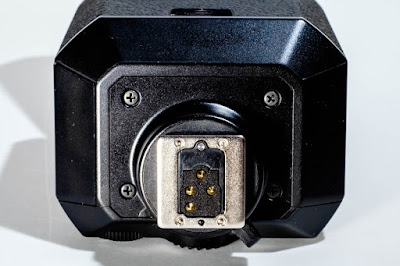 Clip it onto the X-camera.? Now we have a metal shoe to do it with and a lever lock for the front pin. Much better than the plastic shoe and wheel of the EF-42. 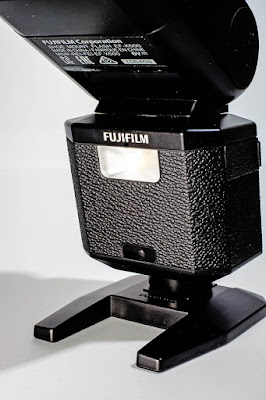 Can you hold the flash from the front as you use it without impeding the function? Yes, but be aware that there is an LED panel at the top and the communication port for the wireless control down the bottom.

Is the tilt a locking mechanism? Yes. The rubber button pressed in lets it go freely. It locks into horizontal and vertical. The swivel has a firm detent. 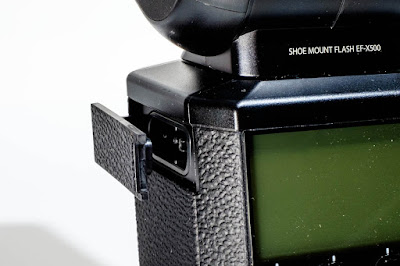 Is this a power port? Yes, it is, and apparently they are going to produce an external battery pack to aid the flash. Wedding and event shooters may rejoice. Until it arrives, we are going to use AA lithium cells.

Setup. Well you can specify a great many things that suggest alternative uses for the flash. It will power off in one hour if you want, or you can power off in 8 hours. I think this accommodates the people who are going to be shooting time-lapse sequences. It will sit there as a remote flash for 10 minutes before giving up or you can ask it to stay alert for 60 minutes. It is all a matter of using up battery power. Try asking ME to stay alert for 60 minutes at a wedding…

The actual menus that apportion the flashes when you are in TTL mode can be sent out to 3 groups – normally this is a daunting set of commands to order up from an LCD screen. In this case Fujifilm have made it ” almost ” intuitive . I think they have benefited by waiting and watching other Japanese makers invent the language of menus. It only foxed me once with a strange use of English.

The weight of the flash is about 120 grammes more than the previous EF-42. As a trade-off, you get a much improved feel of build quality. 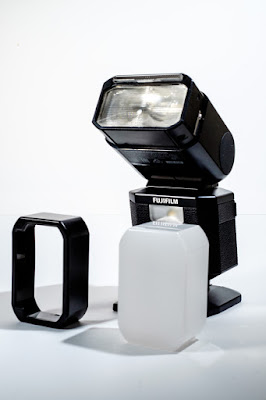 The front bezel around the flash tube is held on with two metal detents. Takes a bit of a struggle to get it off, but once done, you can slip on a box diffuser. It does as much as these designs ever do, and if you slip it forward from the detents, you can get a useful spread of light. Still not as broad as a Mag Mod, so you may still want to add this to the setup.

Tomorrow – first studio shoot. Have I bought the right thing?*

* Yup. I sometimes spend my own money on the things I review. Once you find a good thing – stick to it.