Shooting At Our Troops On Sunday Afternoon 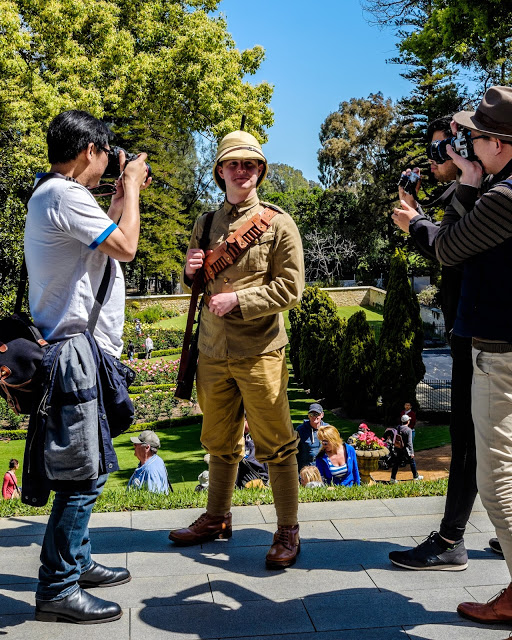 17 Nov Shooting At Our Troops On Sunday Afternoon

Shooting at our troops on Sunday afternoon is a tricky business. I should not recommend it very often, as Australian troops in war zones shoot back, and with professional skill…

When they are ceremonial guards at Government House Open Day they are likely only to be engaged by photographers and sight-seeing tourists. They rarely fire back and when they do it is generally just words. The odd prod with a bayonet, mind, but then you get that on the Armadale train line all the time.

The pictures you see today point out wisdom and folly. And they make commercial suggestion for photographers who might also be looking around at the sights of the city. Let’s start the advertising by analysing:

1. The heading image shows three chaps engaging the young guard as a photographic model in different artistic ways. One has decided that a close head shot will be the best image – another thinks a head and shoulders to show more of the uniform. He’s using the portrait orientation to do it. The third shooter is waiting until the model turns his head to him as he has a wide-angle Zeiss Biogon lens on his camera.

2. The photographers have asked the soldier to pose in the sun but with his face turned away from it. This will let him open his eyes despite the light. Of course, as a British soldier, he has a tropical service helmet to protect his brain pan from excess heat. Only one of the photographers has been as wise as he, and worn a good hat. 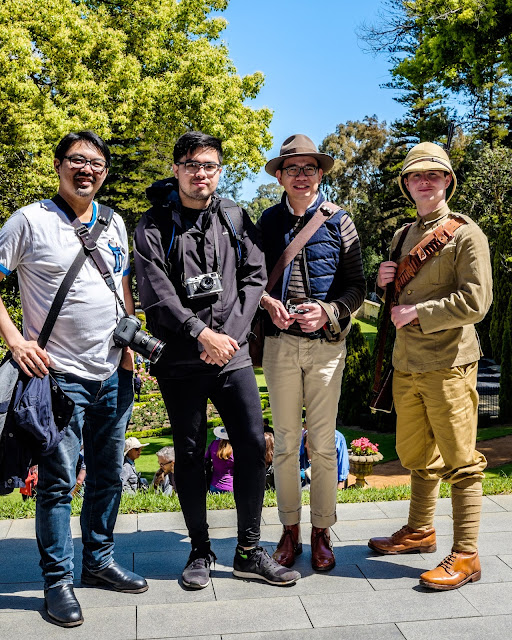 3. The second image shows what choices the three photographers have made in their outfit for the day:

a. Canon man with a midrange zoom. Filter on lens but no lenshood. Danger of flare.
Good camera strap and gadget bag, but a heavy thing to carry on a sunny day. March light and you march further – the camera and lens is all you need.

b. Leica man. That’s an M2 with a Zeiss Biogon wideangle lens on it. No idea what film is in it, but let’s hope for colour neg as it has the widest dynamic range. And he’s not metering. Mind you, on a Perth Spring day we’re at the Sunny 16 point anyway and if he’s been working with the camera and film combo long enough, he should be fine. That camera will last until he’s old and grey so if he keeps it he should get value out of it.

c. Micro 4/3 man with the Olympus. He’s carrying the littlest sensor of the three but probably the most processor power. And a darling of a pro-class Olympus zoom lens – the 2.8 version. He should have extremely sharp files to process when he gets home. He’s wisely put a lens hood on the Zuiko and a hat on himself so there is little harm that the sun can do.

4. All of the people in the pictures are wearing shoes. Sensible shoes. Shoes that can go for a long distance. Shoes that will be comfortable at the end of the day. Unlike this columnist who chose authentic period footwear for a Victorian gentleman and suffered accordingly. I think that a great many of the facial expressions seen in Victorian portraits owe less to stern morals than to tight shoes.

Finally, the commercial moral of the piece – all the shooters made sensible choices.

All will get images to take back home. All were shooting with REAL cameras held steadily to their eyes – not mobile phones waved at arm’s length. The pictures will be sharp.

All the pictures will exhibit good dynamic range and low noise.

All the pictures will be on real computers…eventually…and not left to languish on a Nokia until it is lost…or a Samsung until it ignites. The happy day will be remembered and not forgotten.

Neither will the feet…

The model: DBJ of WAGWLHA