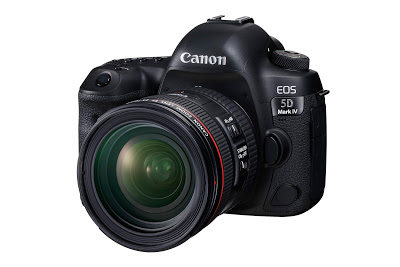 Is there any more thrilling sound than the trumpets announcing a new camera? We all wake up and look about us, even if we are devotees of a different system.

In this case it is the latest evocation of a full-frame Canon DSLR – it’ll be the next in order in the 5D line – the Canon EOS 5D Mk IV.

You may be forgiven for thinking that with the EOS 5D, 5D Mk II, 5D Mk III, 5DS and 5DS R, and now the EOS 5D MkIV that Canon have had more marks than the Spitfire…or Barry Cable…but consider what it means to the working photographer or enthusiast:

1. Any possible teething troubles in the basic body were worked out years ago.

2. Each new evocation has introduced new electronics and new capabilities.

3. The ergonomics were good to start with – they have gotten better. Canon cameras fit everyone’s hand.

4. Everything else fits, too. L lenses, transmitters, flashes, accessories—and its you have a fitted case or bag that carried your Canon EOS 5d-series cameras before it’ll carry the new one!

5. Everything has gotten better:

I can thoroughly endorse the practice of adding another camera to your bag, and choosing one that is the latest of a long line of careful development. I have done so myself, and benefited. You see this in cars, watches, rifles, and many other household appliances – the manufacturer builds upon careful analysis of what has worked rather than blundering wildly out into oddball designs or untried theories – and the wise user can succeed with the gear immediately.

Consider as well the mind of the Canon shooter. If you have used a small-frame Canon camera in the past you are well on your way to knowing the operating pattern of the full-frame one. If you have used any of the EOS 5D series before you are there already – just pick it up, clap on an L series lens, and run!

Oh, pay for it before you do…the staff in the shop are built like antelopes and will catch you before you get half-way down the block…

We’ll have a new camera unveiling night for the EOS 5D Mk IV at a bar in Perth at the start of September. That’s a very cheery idea. It will be held at the Flour Factory, 16 Queen Street Perth, on Thursday, 1st of September. Starts at 6:00 for a 6:30 start, if that makes sense.

Hugh Brown will be speaking and that makes it a fun night just to begin with, but add a new Canon EOS camera and food and drink into the bargain and the whole thing really sparkles. I shall be there myself. All readers of this column who want to be included in the fun should register at www.cameraelectronic.com.au/events to let us know for catering.

Finally, did you know that there was a famous member of the church who wrote a textbook on artillery and also used Canon 5D cameras? It was commemorated on the maps of Spanish river systems. Go to Google Earth and look for: