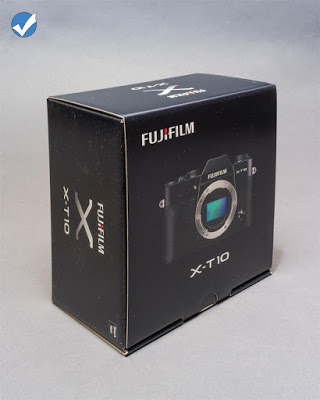 Well, I’m on familiar ground with the Fujifilm X-T10 – I own one and I use it every week. Heres a black one – mine is silver. The aesthetics of the two choices is something you can go and debate at the camera club for yourselves – the nights are cold and you can generate a useful bit of warmth by yelling at each other. In my case I bought the silver one because I fancied it and because I reckon as I wear down the edges they wont look as scuffed as a black one would.

You see, I am using the camera bare – no heavy aluminium Arca-Swiss cradle for this one and a rather elegant brown leather strap. And I mount a Fujinon 27mm f:2.8 lens on the front most of the time. The idea is to get the lightest and most capable rig around my neck while making me look like an innocuous tourist. Because tourists get away with it 99% of the time.

I discovered this on a train to the show the other day. Two 40+ tourists posed and vogued for each other in the priority seats for five minutes while other everyone else in the carriage tried to look the other way. I was longing to whip out the Fujifilm and capture them but did not have the courage. I regret it now. 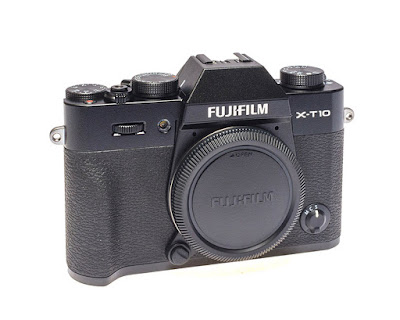 Anyway, back to the X-T10. Some people have tried to decry this as the cheap cousin of the X-T1 and have failed to realise how good it it. The X-T1 is a magnificent camera and so is this one…but this one is smaller and lighter. It isn’t weather sealed, but as I am smart enough to come in out of the rain, I have managed pretty well so far. It does not seem to be a dust magnet either because I have not been plagued with sensor cleaning.

The tilting LCD was the feature I wanted above all – my legs are no fun if I have been doing deep knee bends in the studio looking at a screen. I can’t praise it enough. And one other feature endears it to me over its bigger brother – the EVF is just as fast and is a slightly smaller size – so I get to see all of it with my eyeglasses on. 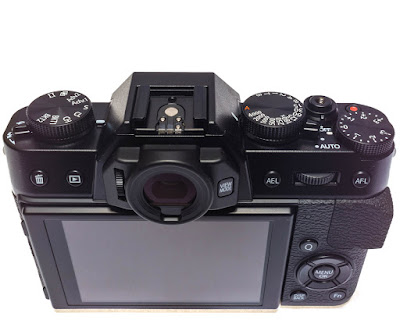 I also appreciate the fact that there is a small popup flash secreted in the viewfinder housing. It is a battery drainer*, but invaluable for quick closeup lighting. I’ve even used it to get good room shots with a slightly higher ISO.

BTW, this is the first Fujifilm camera that has broken me out of the my self-imposed ISO limits. I used to quail at anything above 400. Then I shot a dance show at 800 ( with the extra speed I got another f stop and more depth of field ). Then I tried 1600, 3200, and have even shot at 6400 with success. And Good Old Fujifilm then supplied us with a firmware update for the X-E2 that effectively brought the same performance and features to that camera – so I have a T-10 in another form for field use.

The external controls via shutter speed dial, rings on lenses, and front and back thumb and finger wheels let me run speed, aperture, and ISO without diving into the menu. I must confess to rarely shifting the drive knob off of single exposure though I will try the high speed shooting on some jpegs later this year. The panorama shooting mode does fine – I rather like this one for tourism shots and even if I am not exactly steady on the turn it seems to make a reasonable strip. 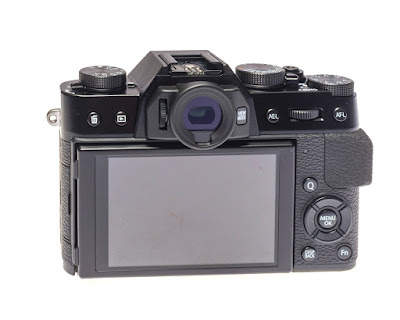 I must also confess that I occasionally use the full automatic lever situated under the Shutter dial. In the days of my old X-10 there was something that they called EXR or SR mode that similarly took over the reins and it was a blessing in weird lighting conditions that I couldn’t guess at. This is not to decry my great photographic knowledge ( hahaha x 8 ) but let’s face it – even with the most sophisticated cuisine in the world, it is sometimes still most satisfying to eat fried potatoes.

If I were to have one gripe about the design it is that the tripod screw is off-centre. No big thing unless you swing round it for panoramas.

Final note – with a smaller-bodied camera like this there is a limit to the number of external controls that can be hung off it. The ” Q ” menu is your friend here – if you program it to your 16 most important criteria you can fly round the choices very quickly with the function wheel and menu buttons. I rarely have to enter the main menu for most shots.

I can thoroughly recommend the camera to anyone. Black or silver.

Note on battery life: I get about 290 shots per battery charge if I leave the LCD on. If I just use the viewfinder and chimp every 20 shots or so it’ll go to 400.