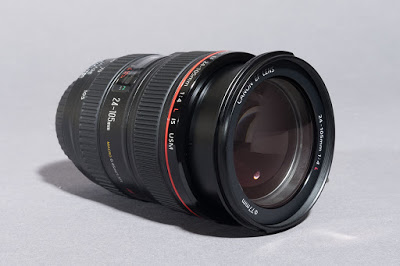 Funny how a buzz-phrase arrives into your vocabulary. You never invent the thing, but one day you find yourself uttering it and you really can’t be certain where it came from.

Some blame social media, some blame America, and some blame slang…forgetting that such useful words as “quiz ” have come from British slang. And “je ne sais quoi ” is obviously French but I don’t know what it is…

Well, if you are bothered by slang or buzz, ignore the term “go to” in reference to the Canon 24-105mm f:4 L IS USM lens and substitute “really competent and useful”. Be sure to dot the “t’s” and cross the “i’s” as well and don’t dare put an apostrophe wrong…*

If you are a Canon DSLR camera user – whether it be the smaller-frame types like the new 80D or the full frame cameras like the new D1X MkII – you can make friends with this lens and it will be to your advantage. The lens is well made, and has a very smooth focusing action and zoom** ring. It will mount on any of the EOS cameras that have a red dot on the mount – and they all do – and is considered by many to be the best choice for a general-purpose lens. Still shooters as well as video makers….brace yourselves…go to it.

What do the figures mean? 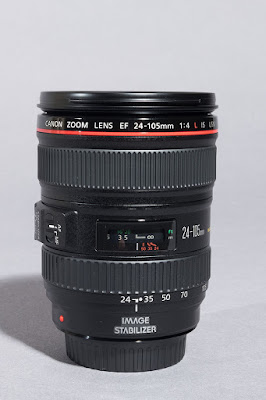 24mm on a small-frame Canon camera is the generally moderate wide angle view of a 35mm lens on an old film camera. Not too wide but enough to get a 4-6 person group of sober people in a party picture. That equates to 2 drunks, by the way. They spread out more.

If you mount it on a full-frame camera at this setting you get the angle of view of a…a…24mm lens…well, you saw that coming. 24mm is the wide-angle view just before 21mm when is all goes pear-shaped. Literally. Do not place friends out at the edge of a group photo with an extreme wide angle lens unless you are Angus McBride***. It is mostly useful for landscape and interior shots and will require careful levelling of the camera body or a heck of a lot of post processing work. 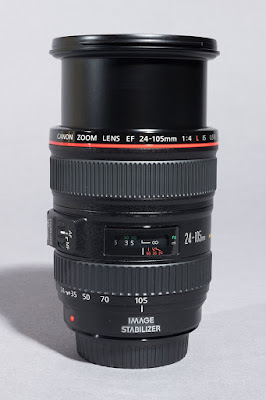 105mm for the small-frame shooter is 157.5mm. Just about a good large-animal at the game park or light plane at the airport length. A little long for a head and shoulders portrait but good for single stage shots. On a full-frame camera it is the classic head and shoulders portrait length and has the perspective that people want to see in their pictures. Barry Manilow and Barbra Streisand might need 210mm but we’ll let that go.

And anything in between is available right there with a twist of the wrist. f4 is a doddle with modern DSLR cameras that run up past 6400 ISO and you can go shoot in dim light with confidence.

Now for the best part…24-105 f4 L lenses are not fashionable. They do not get the gushing fan-boy posts on the internet from the Wenzitcoming Brigade. They have been here for years, doing a superb job, and now are at a price that means that are very much the go-to-because-it-is-a-good-price lens. Camera Electronic have them, and you can get one for your new or old Canon EOS camera and in many cases leave the rest of the glass on the shelf at home.

Come in and play at the shop or order on from the online section of the business. Canon warrant them for 2 years.

* Because zer vill be conseqvences…

** Zoom is also a buzz phrase. ” variable focal length ” for the cultured, impressive, and pedantic if you will…

*** Google Mc Bride’s efforts for the Osprey series of military uniform books and see what I mean.