The Blue Bird Of Happiness 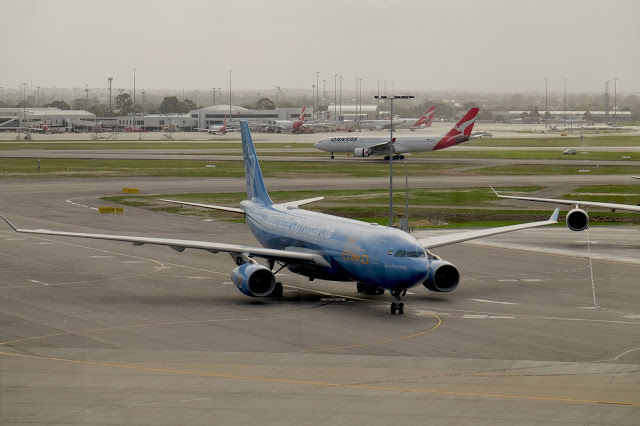 03 May The Blue Bird Of Happiness

Yep. I was right. You can find things to do on a damp Friday in Perth.

In particular, if you have a Fujifilm X-T 10 camera and an 18-135 mm lens and an airplane-mad daughter who in turn has a football-mad boyfriend, it can all come together beautifully.

Hauled out of the house at 1:30 in the afternoon to go to Perth Airport, I took the Fujifilm along to the viewing deck of the terminal building to await the arrival of a rare visitor to Perth – an Etihad Airlines Airbus that is painted in the colours of the Manchester City Football Club. The D and the D’s BF both support that soccer club and watch their matches at all hours of the day and night. I suspect the club is owned by Etihad.

It was a bright but moist day and they were using the short runway at the airport for the takeoffs and landings, presenting the port side of the aircraft as they headed west. The observation deck is readily accessible to visitors without going through any of the cavity searches of airport security so you can wander in there and rubberneck to your heart’s content. I saw several other plane spotters doing the dee and noted that they were using everything from iPhones to Canon and Nikon DSLRs with proprietary lenses and some of the longer Sigma zooms.

The deck is enclosed behind tinted glass, so the end result can be a little off-kilter for automatic white balance systems. I turned the Fujufilm X-T10 to K for the white balance and dialled it up to 5900º K and then added two blips of the magenta button. I think it worked well.

Of course there is always a need for a long lens with these aircraft shots and the 135mm end of the Fujinon lens was the setting employed most – it was a little wider when they taxied the plane in after landing. The ISO at 500, the shutter speed at 1/250th and the aperture at whatever did the trick. The image stabiliser in the lens does a nice job – you really don’t need a tripod or monopod for this sort of light.

Still worth while getting close to the glass if you can to avoid catching reflections and of course if you can keep out of direct glare you get more contrast. I think that many images would benefit from an enhancement of contrast. 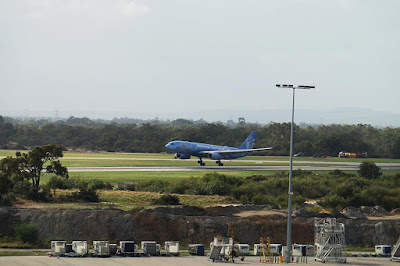 And it is a beautiful aircraft. The Manchester City club have won important trophies and there is one emblazoned just aft of the club name, but there will be further changes later on – they have just changed their advertising logo so that if this aircraft ever returns to Perth you may get to see a different tail.

A pity, in a way, that modern life has changed the way that people can see the planes at Perth Airport. I remember the swans in the pond and open decks above the lounge areas…indeed open gates to the tarmac. But at least there is an open observation platform out there in the boonies at the airport and a group of enthusiasts use it so it is not all gloom and doom. Winter would be the time to go as the fair-weather types would be off away home and you would not have to jostle for position. I don’t believe they allow you to bring Bofors guns or FLAK 88’s.