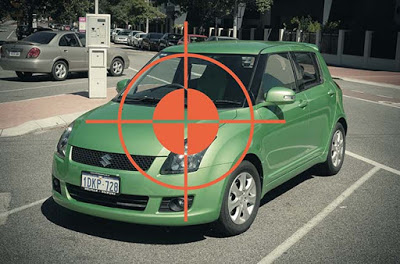 In 7.8 years of shop work I saw little of this – there were really only two times when I saw that we encountered stolen gear, and fortunately the police were right there to help sort the thing out. But I note from Facebook and other internet sites that theft of photographic gear from houses and cars is rife. It is no joke, so don’t look for the usual level of irreverent humour in today’s column.

House breaks are a real feature of everyday life. I’ve had my house broken into once…a terrible feeling, and a financial loss. Fortunately some insurance recovery eased the money side of it but there is very little that makes you feel better about the invasion of your home. It caused me to think out increased physical security for my photo gear and also to institute a security scheme for my digital photos. Fort Knox it’s not, but it should stop loss from the average level of suburban intrusion.

Car thefts are even more devastating – coming as they might when people are vulnerable – tourists leaving their cars at well-known sightseeing destinations as they go away for hours. Thieves know these sites, realise that their victims will be away from the cars for a considerable period of time, and break windows with impunity. Note that this doesn’t have to happen away up north or away down south – I’ve seen cars broken and rifled in suburban RSL car parks while people were inside at a function.

The conventional wisdom says to leave no goods visible from the outside to tempt the thieves. It does not address two things; tourists frequently have cars packed with goods that cannot be stowed…and thieves will break cars windows and rifle contents even if nothing is visible. I suspect they lay in wait, observe when goods are shifted into boots and under seats, and then proceed with a lamentable efficiency.

It is certainly one of the reasons that the firearms regulations in WA have had additional provisions – people must be able to lock firearms into safe containers in vehicles as well as at home. I used to shoot muzzle loading long arms – rifles and muskets – and I’m afraid I’d be debarred from the sport if I had to rely upon my current tiny car to transport things to the range.

But…perhaps it is an indication of one response that tourists could make to the theft problem. I note that even in my little Suzuki Swift that there is a space under the rear parcel tray that could be literally armoured and deadlocked to contain photographic gear. A great nuisance, I might add, and a considerable expense, but do-able. If I were a travelling photographer liable to leave my vehicle in lonely places, I would consider it. It would not stop a broken window but at least would not yield anything more of value.

Note to Camera Electronic customers: Talk to the staff about professional photographic equipment insurance. It is a specialist field and possibly expensive, but then so is so much of our beloved gear.