The Curious Case Of The Dark Grey Filter 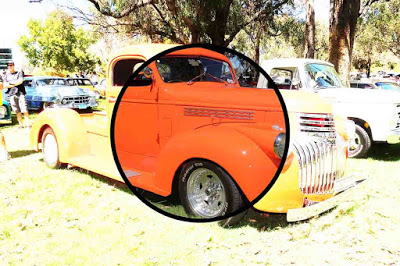 06 Apr The Curious Case Of The Dark Grey Filter

Those of us who use cameras to take pictures in the bright noon sunlight get what we deserve – brilliant colours in the main subjects, overexposed skies, and deep shadows under overhanging objects. These overhangs can be eyebrows, noses, lips, chins, and bosoms. And that’s just on cars – people are worse…

Well, it comes with the climate, and some days the climate picks people up and beats them against the lamp posts. It is different in cloudier or hazier places – if you have an atmosphere that you can stack for use later it will cut out a lot of the sun and diffuse the rest so that shadows are naturally filled in. In some cases it is a real boon to the outdoor shooter who deals with close and medium subjects. But for the Western Australian at 12:00 we need some artificial fill.

Reflectors are a good traditional idea – people can carry them, erect them. position them to advantage and bounce the ample sunlight pretty well where it is needed. Camera Electronic sell a variety of them from dinner-plate size up to Insanity-On-A-Frame size. Lastolite, Promaster, and Glanz are three brands to look for. You’ll need a spare hand or two to use them to best advantage.

If you don’t have a spare hand, you can fire an electronic flash from the camera position to do the fill. The business of balancing it to match or run slightly under the prevailing light is the tough part – tough even though TTL mechanisms in camera and flash take out a lot of the mathematics. But as the WA sun is bright and frequently cameras cannot go under 100 or 200 ISO, the exposures at synchronising speed frequently demand an f stop of 22 or even smaller. That’s a tough ask of the average small electronic flash – you’ll see professionals going the expensive step further of taking out field mono-block strobe heads to try to match or overpower old Sol.

The users of the  Fujifilm X-100 series of cameras or any others that use leaf shutters can cope better, as these cameras will synch their shutters up to 1/1000 and thus the aperture needed is wider  and the flash has a chance to supply enough light. But what of the mirror-less cameras that have focal plane shutters? 1/180 synch at the best and that means f:16 at noon.

Well, help is on the way – we mentioned a press release for a new Fujifilm flash later in the year. Re-reading the DP Review spiel says that it will have a high-speed synch that will up the speed, lower the f stop, and pump out more light as well. We can only hope that this promise is fulfilled because the chance of friendly and controlled cloud cover in WA in summer is pretty darn remote.

Note: Cheating by putting an ND8 in front of the lens and imagining that you have dropped the ISO by three stops is like pulling yourself up by your bootstraps.* If the TTL circuit is activated in the flash it just thinks it has to pump out three more stops of light and you’ve adjusted nothing. The circus trick only works if you have a manual flash out there or one of the old film types that depends upon its own thyristor to quench. Whether you do it or not depends:

1. Upon whether you own an old pre-digital flash or one of the new ones that will avoid TTL.
2. Upon the amount of tootling and fiddling you are prepared to do to add more light into the fill. Consider the fact that even the most basic image editing programs allow you to boost shadow exposure…
3. Whether you can be bothered to stand there and do the photographic version of high-school algebra before every shot. I know people who do, and do it gladly, but then I know some pretty random people…Hey, Guys…

And a sop to the management. Guys and gals, you CAN buy Profoto and Elinchrom units that will pump out more light than you can use. All it needs is money, and the gear is easy to use. If you want to do this lighting you need this gear. Come in and talk to Dom or Carlos. They know, you know. Also see our on-line shop.

* And I am prepared to admit that I tried it. Hell, I tried sea slug at a Chinese banquet and lived. How much dumber could anything be…?