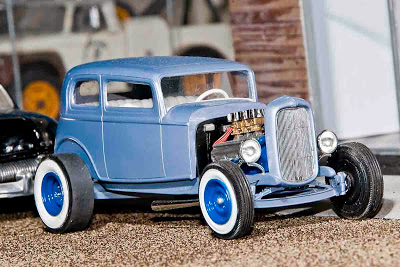 A couple of days ago the national trainer for the Fujifilm company visited our shop and took us in groups for sales training. It was interesting to see the new components in the X-series cameras explained – the question of the new X -trans sensor in particular. He was a great speaker because he finally explained the real cause of moiré patterning in images and the various means that have been adopted to deal with it.

He was also a great speaker because he showed me how  to update the firmware on my X-10 camera. It was done in about 3 minutes and the difference it has made in the operation of the camera is magic.

I also took courage to re-jig an another Fuji X camera and watched it go from good to great. See the images for this post. The hot rod was taken with my standard package of Nikon D300s, 18-200 lens, and SB700 flash on a Stroboframe rig. Note limited depth of field that is just enough to get the car in.

Now look at the Fuji image – the ’49 Mercury. It is under different conditions – a bare studio set and some studio lights. There is less contrast as the light source is huge.

There are some similarities – the sensors in both cameras are APS-c size. It was flash exposure so the shutter speed was about 1/250 second – no movement.

The lens focal lengths were different – 120mm for the rod and 23mm for the Mercury. The f stop for the rod was f:22 and for the Mercury, f:16. This is the smallest stop the 23mm lens can do. Of course they are both going to be affected by diffraction, but unless you sacrifice DOF by sticking to f:8, you are going to have to deal with it.

Or not – if you buy the new Fuji X-100s. There is a special computer program in it that specifically targets areas that are spread by diffraction while preserving the portions of the image that are not so afflicted – the result would be dramatically sharper resolution in the picture. I don’t know, because I am still using the older X camera, but the new guys are going to get world-beating results.

Note also that the update added the capability to see “focus-peaking” in the LCD screen. It is the enhancement of the in-focus portion of the image with a black or white rime. It is evident even in small areas and allows you to get a sharper manual focus than you could do with a bare eye. I could “walk” the focus back from the headlight of the car to the front of the windshield to maximise the depth of field. Beats peering into a small viewfinder in the dim focusing light of the studio mono-blocks. 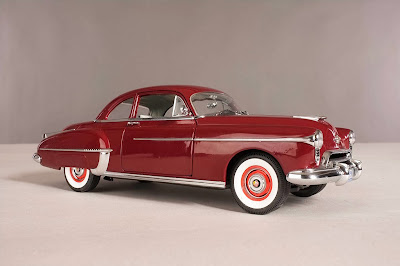 My honest conclusion is that it is an image as good as or better than that produced by my regular studio tabletop rig. Provided I want to point of view to be that of the 35mm lens on an older film camera, it is ideal. If I wish to replicate the 50mm on an old film camera it will still have to be the Tokina 35 macro – if I want wider views the Sigma 8-16 will be needed. At least I now have and excuse to have another camera!