Everything New Is Old Again…

15 Feb Everything New Is Old Again…

You can retro anything these days – cars, clothing, food, experiences – anything.

Case in point happened last night. I was asked to produce a slide show of my recent trip to Melbourne. Easy enough – the images had been worked over in PSE10 and were sitting on the Drobo. I just rounded them up and dropped them into an SD card. The daughter plugged it into the side of the big screen TV and pushed the remote control.

The first thing that caught the eye was the clarity and the colour of the images – I remembered the scenes vividly, I had seen them on the computer, and now they were being displayed on the TV. I think I can say the colour accuracy was perfect all the way through. This is a bow in the direction of Fuji, Datacolor, Mackintosh, and whoever is the maker of the television. We seem to have a harmony that I had not expected. This is every bit as good, if not better, than the old days of projecting Kodachrome through a Pradovit.

The second thing is there appears to be some sort of a rider file that accompanies each image and that the TV reader stumbles over – every other image is a blank but all the images eventually do display. Some TV thing, not important unless you were seeking to make a habit of impromptu slide shows. I just regarded it as the digital equivalent of getting the 35mm slide in back to front or upside down in the old projector

Third observation is that the reaction of the audience is a constant – whether someone is showing cave paintings of the last Mammoth hunt to a visiting tribesman, or three trays of slides from a 1961 trip to Fiji, or 500 digital images of Melbourne….the boredom is palpable. As photographers, we should learn to make it short and sharp, but we never do. My excuse is someone else was showing the things….

I am going to take this to heart and use it as a maxim for my blog writings -whether you see it here on the commercial shop blog or on my personal entertainment blog ( hrhoa.wordpress.com ) I will restrict what I say and what I show to manageable portions. Of course, on my own blog – “Here All Week” I can express what may be different opinions than here, but that is the prerogative of any creative writer.

For now, remember that you need to engage the viewers with beauty and rythym and leave them wanting more. 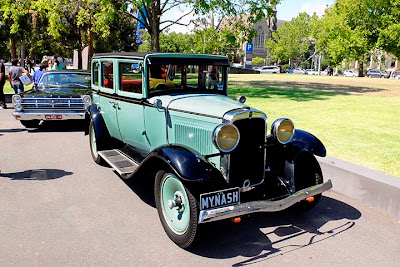 PS: Club together and buy me this Nash. At least collect enough to buy me a 1:18 scale model of one – there’s a good fellow…