Backing Up On The Road – With Hyperdrive 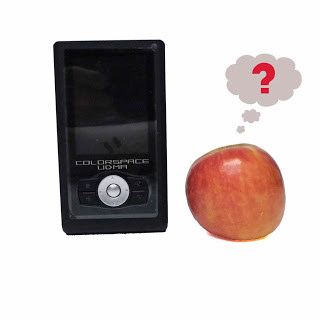 14 Feb Backing Up On The Road – With Hyperdrive

Betcha haven’t seen one of these for a year or so – in the wake of the introduction of iPads, tablets, clouds, and cheap memory cards the portable storage device seems to have fallen by the wayside.
It got all unfashionable – a fate that it worse than debt in the photo trade*.
..

We used to carry different forms of these -they stored anywhere from 80 to 160 Gb of data from all different sorts of cards and let you see what was on the card on a small LCD screen at the front – just to make sure you knew what it was that you had on the card. People planning to travel to exotic places and photograph exotic images bought them so that they could download the contents of the card each night and then go out fresh the next day. backup insurance against data loss.

Well, as I say,  other electronic firms thought up new ways of doing this, and memory cards got cheaper and a lot of people elected to just store the cards or fire off the images somewhere else for eventual retrieval…trusting that the somewhere else would continue to exist and would obligingly send back the images on request.

Call me a cynic, or pessimist, or sour old apple, but I think the idea of storing your own backup is better. Trust not the blandishments of those who say they will do something for you for nothing, for their assistance is worth exactly what you pay for it… 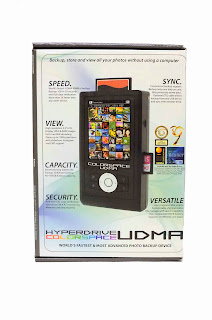 The Hyperdrive Colorspace UDMA is a black box with card slots, USB port, battery charge socket, and screen. You can navigate its menu with a 4-way button. It will absorb 500Gb of data, display it, and spit it back out at about 40Mb/sec. It’ll decode RAW and show you a jpeg preview. It will incrementally back up a card, ignoring data that it has already gleaned – you can plug it in day by day and it will add the new images of the trip.

Better than taking your computer? Well, the laptop this is being written on is my backup for a trip and it weighs 4Kg with all the associated flapdoodle – and is the size of a Papa Giuseppe Family Pizza. The Hyperdrive unit weighs 300 grammes and is the size of a pocket book. If you don’t need a full computer on the trip, take the drive. You can save 3.7 Kg for fresh underwear or bottles of rum.